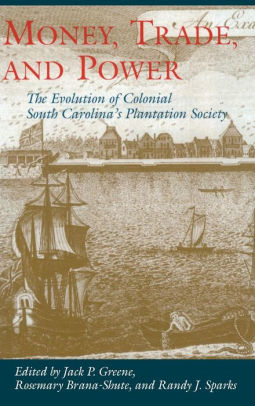 Examines the economic and cultural development of England's most British colony

Reflecting the burgeoning interest of colonial historians in South Carolina and its role as the economic and cultural center of the Lower South, Money, Trade, and Power is a comprehensive exploration of the colony's slave system, economy, and complex social and cultural life.

Turning to the colony's reliance on slave labor, William L. Ramsay analyzes the institution and abandonment of Indian slavery; Jennifer Lyle Morgan examines the reproductive capabilities of slave women; and S. Max Edelson looks at the distinctive social position of skilled slaves. Robert Olwell considers how South Carolina public officials adapted the office of justice of the peace to the needs of a slave society, while Matthew Mulcahy shows how calamities of fires and hurricanes exacerbated the problem of slave control.


Jack P. Greene is the Andrew H. Mellon Professor in the Humanities at The Johns Hopkins University and the author of more than twenty-five books. Greene lives in Baltimore, Maryland.

Rosemary Brana-Shute, an associate professor at the College of Charleston, is a historian of Latin America, the author of articles and essays, and the editor of several essay collections. Brana-Shute lives in Charleston.

Randy J. Sparks is an associate professor of history at Tulane University and the author of On Jordan's Stormy Banks: Evangelicalism in Mississippi, 1774–1876. Sparks lives in Charleston.

"These essays, largely the work of a promising group of younger scholars, establish an important groundwork for a new wave of significant scholarship on the colonial South Carolina lowcountry. Many offer useful and fresh evidence. Read collectively, they also provide a remarkably comprehensive account of the development of the region."—Thad W. Tate, Murden Professor of History Emeritus, College of William and Mary

"With these fifteen essays, the Lower South and its central colony, South Carolina, is at last receiving the scrupulous attention and imaginative investigation once afforded New England, the Chesapeake, and the Mid-Atltantic regions. This collection reveals a colonial society that was dynamic as well as exploitative, diverse as well as hedonistic—but above all, infinitely fascinating."—Philip Morgan, The Johns Hopkins University

"The editors of this volume are to be warmly congratulated on having assembled a quite dazzling array of essays that represent the very best of recent scholarship on the colonial South Carolina Lowcountry."—Betty Wood, University of Cambridge