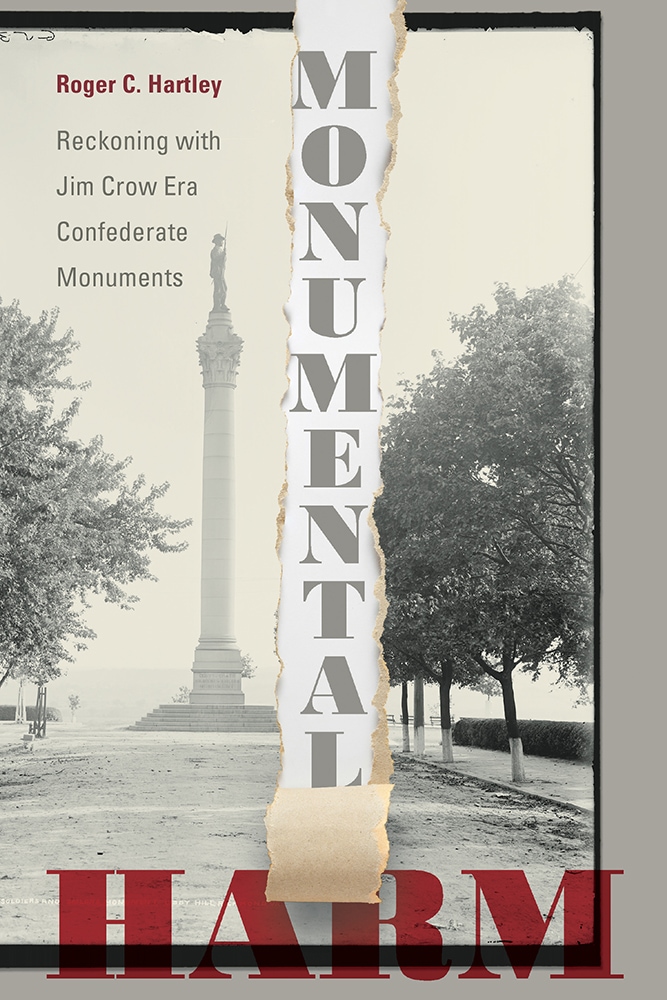 In recent years, the debate over the future of Confederate monuments has taken center stage and caused bitter clashes in communities throughout the American South. At the heart of the debate is the question of what these monuments represent. The arguments and counterarguments are formulated around sets of assumptions grounded in Southern history, politics, culture, and race relations. Comprehending and evaluating accurately the associated claims and counterclaims calls for a careful examination of facts and legal considerations relevant to each side's assertations. In Monumental Harm, Roger C. Hartley offers a road map to addressing and resolving this acrimonious debate.

Although history and popular memory play a vital role in the discussion, there have been distortions of both parts. Monumental Harm reviews the fact-based history of the initial raising of these monuments and distinguishes it from the popular memory held by many Confederate-monument supporters. Hartley also addresses concerns regarding the potential erasure of history and the harm these monuments have caused the African American community over the years, as well as the role they continue to play in politics and power.

The recent rise in White nationalism and the video-recorded murders of Black citizens at the hands of White police officers have led to nationwide demonstrations and increased scrutiny of Confederate monuments on public land. As injustice is laid bare and tempers flare, the need for a peaceful resolution becomes ever-more necessary. Monumental Harm offers a way to break the rhetorical deadlock, urging that we evaluate the issue through the lens of the U.S. Constitution while employing the overarching democratic principle that no right is absolute. Through constructive discourse and good-faith compromise, a more perfect union is within reach.


Roger C. Hartley, a professor of law at the Catholic University of America, is an award-winning teacher of constitutional law and labor law. He is the author of three other books and dozens of articles in leading academic journals.

"The fraught subject of Confederate monuments in prominent public spaces receives the most forthright, well-informed, and unemotional treatment in this book that I have encountered anywhere. Whether or not one agrees with Hartley's argument that these products of the Cult of the Lost Cause symbolizing slavery and White supremacy should be relocated to private land, museums, or Confederate cemeteries, the reader will understand the issue better than ever before."—James M. McPherson, author of Battle Cry of Freedom: The Civil War Era

"Monuments to White supremacy have a deleterious impact on American society. Informed by historical accounts, the imperatives of racial justice, and his own legal expertise, Roger Hartley surveys the problematic presence of Confederate monuments in American public spaces and convincingly makes the case for their removal and relocation."—Erika Doss, author of Memorial Mania: Public Feeling in America

"Constitutional law professor Roger Hartley's book is a clear and practical exploration of the Confederate monuments controversy. A law brief of sorts for the removal of the hundreds of Confederate statues that still stand, Monumental Harm compellingly argues that opponents should pay less attention to monument defenders' motives and instead focus on the very real harm that Confederate statues inflict on American society today. Hartley shows monument opponents how to make their case—and win."—Blain Roberts and Ethan J. Kytle, authors of Denmark Vesey's Garden: Slavery and Memory in the Cradle of the Confederacy

"More than a history of Confederate monuments, Roger C. Hartley's Monumental Harm steers readers through some of the toughest questions in the debate over whether these monuments should remain or be removed. Anyone hoping to better understand this divisive debate will profit from reading this book."—Kevin M. Levin, author of Searching for Black Confederates: The Civil War's Most Persistent Myth

"The problem of Confederate monuments has been the starting point for a national and international reconsideration of the memorial landscape. Roger C. Hartley's lucid analysis provides a valuable guide to addressing the legacy of the Lost Cause and a framework for thinking about protests against other public monuments."—Thomas J. Brown, author of Civil War Monuments and the Militarization of America

"Monumental Harm is an important book. It deserves a readership beyond those who normally follow the emerging currents of Civil War historiography."—Civil War Times

"unique... Hartley relies on the racist history of building the monuments as justification for their removal. He chronicles the erection of the monuments and the motives of those who built them, arriving at the conclusion that contextualization and relocation will not achieve the goal of erasing their racist connotations. This argument is both clever and persuasive."—Choice Reviews