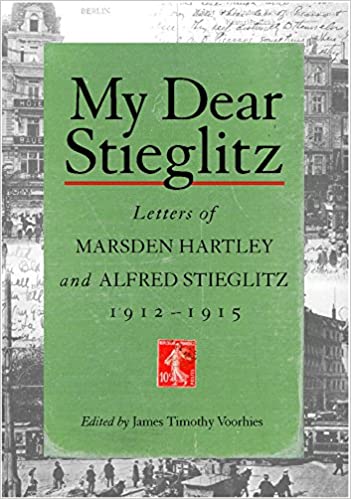 Correspondence between two prominent artists that chronicles the modern art world in New York, Paris, and Berlin during the early twentieth century

A collection of previously unpublished correspondence between American artist Marsden Hartley and avant-garde impresario and photographer Alfred Stieglitz, My Dear Stieglitz chronicles a painter's three-year-plus European pilgrimage before—and during the inception of—World War I. Beginning with Hartley's 1912 arrival in Paris, his letters to Stieglitz from this pioneering capital of modern art and world culture provide sweeping accounts of Gertrude Stein's salons, gossip of Montparnasse cafés filled with poets, writers, artists, and composers, and commentary on paintings by Picasso, Cézanne, and Matisse. Searching for social acceptance as well as artistic growth and inspiration, Hartley reports to Stieglitz on leading galleries such as Ambroise Vollard, Bernheim-Jeune, and Paul Durand-Ruel, while finding solace in art at the Musée du Louvre.

From Germany in early 1913, Hartley writes vibrant letters about the Expressionist artists in Munich, Wassily Kandinsky and Franz Marc, and their group Der Blaue Reiter. Hartley's missives quickly become up-to-the-minute exposés on avant-garde trends in Germany with childlike lamentations over the bustling, modern city of Berlin. His glory in Germany turns solemn with the onset of World War I and the death of his close friend, a German officer named Karl von Freyburg—a loss vividly depicted in Hartley's renowned war motif paintings from this period. Steiglitz's correspondence from New York gives an American point of view of a war in Europe and chronicles exhibitions at 291, his own gallery for modern art. Although Stieglitz's letters are less personal than Hartley's, he shows subtle signs of resentment toward the famous 1913 Armory Show, which usurped his reign over modernism in America.

Closing in late 1915 with Hartley's return to an America filled with anti-German sentiment and a New York seasoned by the influx of modern art, My Dear Stieglitz provides an intimate perspective on modern art and the human condition during the tempestuous years of the early twentieth century.


James Timothy Voorhies works in the Department of European Painting at the Metropolitan Museum of Art and has taught art history at the San Francisco Art Institute. He lives in New York City.

"My Dear Stieglitz charts a short, but key period in the careers of two extraordinary figures in American modernism. In these letters Marsden Hartley shares with his dealer and fellow artist, Alfred Stieglitz, intimate details about his life and the origins of his art. We also sense Stieglitz's crucial role in supporting Hartley's career. Voorhies has done a commendable job of annotating and introducing the correspondence, producing a book that is essential to understanding the history of the first American avant-garde."—Jonathan Weinberg, Getty Research Institute