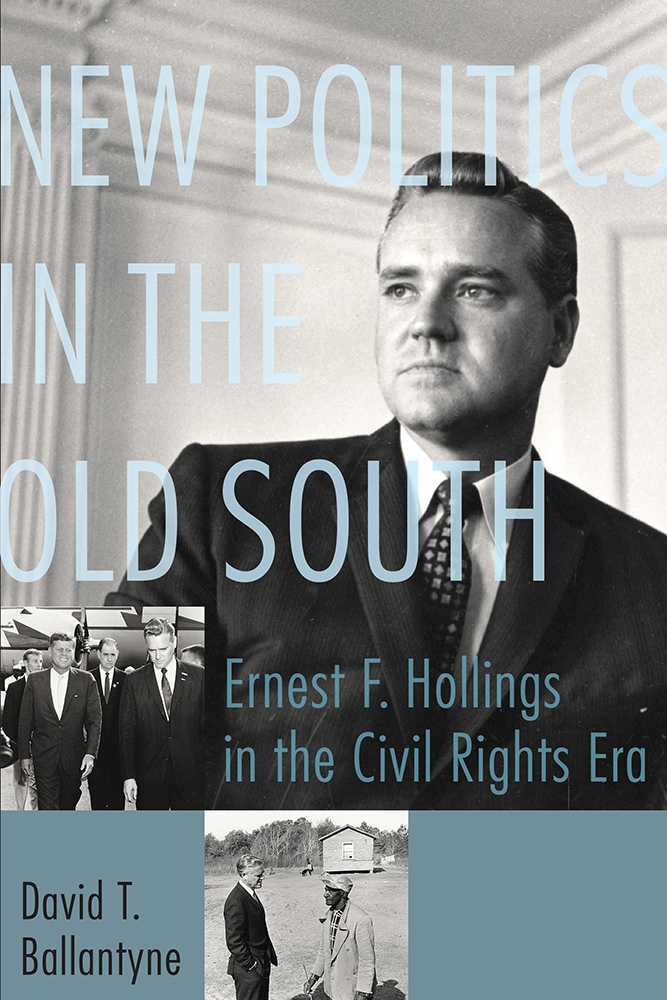 New Politics in the Old South

The first scholarly account of the South Carolina Democrat's career and the transformation of Southern U.S. politics and society during the civil rights era

New Politics in the Old South is the first scholarly biography of Ernest F. "Fritz" Hollings, a key figure in South Carolina and national political developments in the second half of the twentieth century. Throughout his career Hollings was renowned for his willingness to voice unpleasant truths, as when he called for the peaceful acceptance of racial desegregation at Clemson University in 1963 and acknowledged the existence of widespread poverty and malnutrition in South Carolina in 1969. David T. Ballantyne uses Hollings's career as a lens for examining the upheaval in southern politics and society after World War II.

Hollings's political career began in 1948, when he was elected to the South Carolina House of Representatives. He served as governor from 1959 to 1963 and then as a U.S. senator from 1966 until he retired in 2005. Ballantyne illuminates Hollings's role in forging a "southern strategy" that helped move southern Democrats away from openly endorsing white supremacy and toward acknowledging the interests of racial minorities, though this approach was halting and reluctant at times. Unlike many southern politicians who emerged as reactionary figures during the civil rights era, Hollings adapted to the changing racial politics of the 1960s while pursuing a clear course—Vietnam War hawk, fiscal conservative, regional economic booster, and free-trade opponent.

While Hollings was at times an atypical southern senator, his behavior in the 1960s and 1970s served as a model for survival as a southern Democrat. His approach to voting rights, military spending, and social and cultural issues was mirrored by many southern Democrats between the 1970s and 1990s. Hollings's career demonstrated an alternative to hard-edged political conservatism, one that was conspicuously successful throughout his Senate tenure.


David T. Ballantyne is a lecturer in American history at Keele University in the United Kingdom. He holds Ph.D., M.Phil., and M.A. degrees from the University of Cambridge and has previously worked as a postdoctoral researcher at Leiden University in the Netherlands.

"Ballantyne has provided a solid discussion of how the most durable South Carolina politico of the generation that came to manhood during the Second World War evolved on issues involving race."—H-Net Reviews

"In this examination of Fritz Hollings's political career, Ballantyne tells the story of a vital player in southern history in the second half of the 20th century. By analyzing the crucial balance that Hollings maneuvered between civil rights pressures and the opposing sentiments of white conservative constituents, Ballantyne probes the fluidity and interplay of southern politics and political moderation. This is a significant contribution to the historical narrative."—Orville Vernon Burton, Clemson University

"a thorough and thought-provoking exposé on Ernest Frederick Hollings, a man who's unique, politically astute, and useful work—as well as his brave and principled stand at the end of his governorship—set him boldly apart from the other Deep South politicians... a worthwhile read for scholars and practitioners in the fields of history and political science."—International Social Science Review