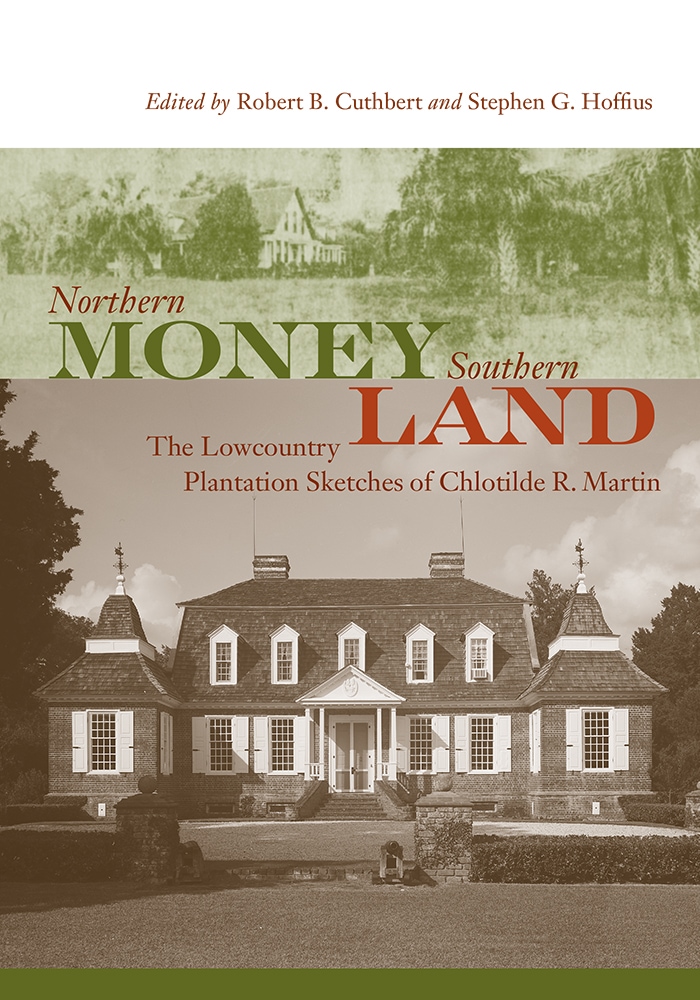 edited by Robert B. Cuthbert and Stephen G. Hoffius

In the early 1930s Chlotilde R. Martin of Beaufort, South Carolina, wrote a series of articles for the Charleston News and Courier documenting the social and economic transformation of the lowcountry coast as an influx of wealthy northerners began buying scores of old local plantations. Her articles combined the name-dropping chatter of the lowcountry social register with reflections on the tension between past and present in the old rice and cotton kingdoms of South Carolina. Edited by Robert B. Cuthbert and Stephen G. Hoffius, Northern Money, Southern Land collects Martin's articles and augments them with photographs and historical annotations to carry their stories forward to the present day.

As Martin recounted, the new owners of these coastal properties ranked among the most successful businessmen in the country and included members of the Doubleday, Du Pont, Hutton, Kress, Whitney, Guggenheim, and Vanderbilt families. Among the later owners are media magnate Ted Turner and boxer Joe Frazier. The plantation houses they bought and the homes they built are some of the most important architectural structures in the Palmetto State—although many are rarely seen by the public. In some fifty articles drawn from interviews with property owners and visits to their newly acquired lands, Martin described almost eighty estates covering some three hundred thousand acres of Beaufort, Jasper, Hampton, Colleton, and Berkeley counties.

Martin's lively sketches included stories of wealthy young playboys who brought Broadway showgirls down for decadent parties, tales of the first nudist colony in America, and exchanges with African American farmhands who wanted to travel to New York to see their employers' primary homes, which they had been assured were piled high with gold and silver. In the process, Martin painted a fascinating landscape of a southern coastline changing hands and on the verge of dramatic redevelopment. Her tales, here updated by Cuthbert and Hoffius, will bring modern readers onto many little-known plantations in the southern part of South Carolina and provide a wealth of knowledge about the history of vexing tensions between development and conservation that remain a defining aspect of lowcountry life.


Chlotilde R. Martin (1895–1991) of Beaufort wrote extensively about South Carolina's southern coast for the Charleston News and Courier and other publications. In addition to her 1930s plantation sketches, she wrote the weekly column "Lowcountry Gossip" for more than three decades. She was the author of Sea Islands to Sand Hills, with photographer Carl Julien, and Winds of Change in Gullah Land.

Robert B. Cuthbert, a native of Summerville, attended Clemson University and graduated from the College of Charleston and. He has served on the staff of the U.S. Vegetable Lab at Charleston for more than forty years. An active member of the South Carolina Historical Society, he has an avid interest in researching the history of the South Carolina coast.

Stephen G. Hoffius is a freelance writer and editor in Charleston and the former director of publications for the South Carolina Historical Society. He is coeditor with Angela D. Mack of Landscape of Slavery: The Plantation in American Art.

"In the 1920s, as poverty and weather ground away at South Carolina's formerly grand plantations, Sam Stoney of Medway was known to say, 'Lord, please send us a rich Yankee.' Chlotilde Martin's engaging articles provide fascinating insight into an overlooked era of history that largely determined the shape of today's lowcountry landscape. As a native South Carolinian, I often thank the Lord for the rich Yankees who decided that their adopted land was too beautiful to despoil, and consequently helped launch one of the nation's most successful conservation movements."—Dana Beach, executive director, Coastal Conservation League