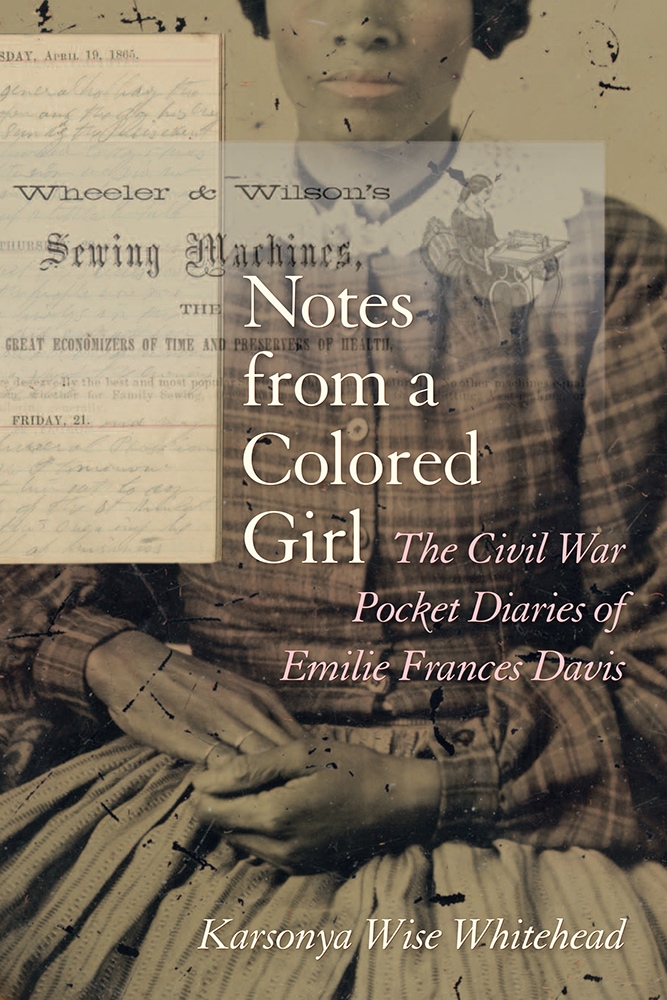 Notes from a Colored Girl

In Notes from a Colored Girl, Karsonya Wise Whitehead examines the life and experiences of Emilie Frances Davis, a freeborn twenty-one-year-old mulatto woman, through a close reading of three pocket diaries she kept from 1863 to 1865. Whitehead explores Davis's worldviews and politics, her perceptions of both public and private events, her personal relationships, and her place in Philadelphia's free black community in the nineteenth century.

Although Davis's daily entries are sparse, brief snapshots of her life, Whitehead interprets them in ways that situate Davis in historical and literary contexts that illuminate nineteenth-century black American women's experiences. Whitehead's contribution of edited text and original narrative fills a void in scholarly documentation of women who dwelled in spaces between white elites, black entrepreneurs, and urban dwellers of every race and class.

Notes from a Colored Girl is a unique offering to the fields of history and documentary editing as the book includes both a six-chapter historical reconstruction of Davis's life and a full, heavily annotated edition of her Civil War-era pocket diaries. Drawing on scholarly traditions from history, literature, feminist studies, and sociolinguistics, Whitehead investigates Davis's diary both as a complete literary artifact and in terms of her specific daily entries.

From a historical perspective, Whitehead re-creates the narrative of Davis's life for those three years and analyzes the black community where she lived and worked. From a literary perspective, Whitehead examines Davis's diary as a socially, racially, and gendered nonfiction text. From a feminist studies perspective, she examines Davis's agency and identity, grounded in theories elaborated by black feminist scholars. And, from linguistic and rhetorical perspectives, she studies Davis's discourse about her interpersonal relationships, her work, and external events in her life in an effort to understand how she used language to construct her social, racial, and gendered identities.

Since there are few primary sources written by black women during this time in history, Davis's diary—though ordinary in its content—is rendered extraordinary simply because it has survived to be included in this very small class of resources. Whitehead's extensive analysis illuminates the lives of many through the simple words of one.

Karsonya Wise Whitehead is an assistant professor of communication and African and African American studies in the Department of Communication at Loyola University Maryland, an award-winning master teacher and curriculum writer in African American history, and a three-time New York Emmy-nominated documentary filmmaker. She lives in Baltimore, Maryland, with her family.

"It cannot be emphasized enough how important Davis's journals are to forwarding the study of nineteenth-century social history. Whitehead delivers a rare gem for readers in her well-written, well-researched work that will resonate with those interested in sociocultural history, Civil War-era history, African American history, women's history, or diaries and autobiographies. An absolute must-read."—Library Journal (starred review)

"Notes from a Colored Girl is a welcome addition to the rapidly growing body of scholarship on the history of free blacks in the antebellum Civil War-era North. It will undoubtedly prove indispensable to students and scholars."—Erica L. Ball, Journal of American History

"Readers of Whitehead's volume will be pleased with the text; moreover, scholars will be inspired to pursue new research projects thanks to Whitehead's excellent transcription, outstanding contextualization, and generous observations."—Karol K. Weaver, H-Net Reviews

"Notes from a Colored Girl is a beautiful testament to the personal life of a single free black woman, superbly reconstructed within the social, political, and religious life of free people of color in Civil War Philadelphia. Karsonya Wise Whitehead's meticulous attention to detail brings Emilie Francis Davis - a literate woman participating in and shaping the spaces of a free society near the contested borders of slavery - and her personal writings to life. Emilie's diary is an enduring legacy of the mundane and the extraordinary, carrying us through everyday moments of joy and tragedy, of sewing, socializing, church and school, all within the larger contextual landscape of a nation in upheaval and a community undergoing change. Whitehead treats us with a rare glimpse into a spirited and articulate single woman's interior world, revealing how she navigated the worlds of work, friendships, religion, family, politics, and community. A great addition to interdisciplinary studies, Notes from a Colored Girl is perfect for exploring the historic contours of race, gender, faith, freedom and community in the nation's most vibrant biracial city of the age."—Kate Clifford Larson, Ph.D., author, Bound For the Promised Land: Harriet Tubman, Portrait of an American Hero

"With Notes from a Colored Girl Karsonya Whitehead has painstakingly rendered the obscure visible and shed light on a singular figure whose life is a stand-in for millions of unknown stories. This is history at its most democratic and scholarship at its most vital."—William Jelani Cobb, associate professor of history and director, Institute of African American Studies, University of Connecticut

"'To day has bin a memorable day. I thank God I have bin here to see it.' So begins the pocket diaries of free black woman Emilie Davis of Philadelphia on the day of Emancipation at the midpoint of the Civil War. Her words also capture my feelings in seeing Davis's diaries published under the expert eye of Karsonya Wise Whitehead, whose scholarly annotations not only set the scene but reveal how this 'everyday' domestic-dressmaker's decision to record her thoughts at the critical hours of the African American journey was itself an emancipatory act."—Henry Louis Gates, Jr., Alphonse Fletcher University Professor, Harvard University

"This is a remarkable glimpse into the head of a Civil War-era African American woman. Emilie Davis's perspective shows her full consciousness of her role as a privileged urbanite. Whitehead's insightful historical/literary contextualization of Davis's journal makes this an invaluable contribution to our understanding of nineteenth-century communities."—Emma Lapsansky-Werner, professor of history, Haverford College

"Providing a coherent, cogent record of 19th-century life, this volume moves a woman of color from obscurity to significance."—Choice