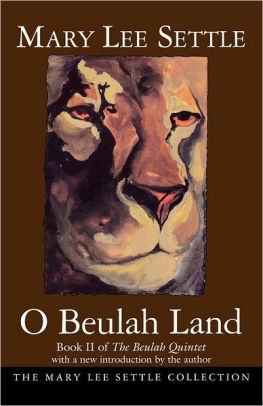 Book II of The Beulah Quintet

O Beulah Land, the second volume of The Beulah Quintet—Mary Lee Settle's unforgettable generational saga about the roots of American culture, class, and identity and the meaning of freedom—is a land-hungry story. It follows the odyssey of Johnny Church's descendants as they leave England in search of freedom and land. One of those descendants, Jonathan Lacey, settles in the backcountry of Virginia, where he battles both Native Americans and white frontier bandits and builds the beginning of a flourishing estate named Beulah. The novel closes shortly before the commencement of the Revolutionary War, with Lacey elected to the House of Burgesses and his family line firmly established in what is to become the state of West Virginia.

Mary Lee Settle (1918–2005) was born in Charleston, West Virginia, and lived in England, Turkey, and New York. Her novel Blood Tie won a National Book Award and her most recent novel, Choices, received the Lillian Smith Book Award for fiction. In addition to The Beulah Quintet, Settle authored the novels Charley Bland, Celebration, The Clam Shell, The Love Eaters, and The Kiss of Kin and a memoir, All the Brave Promises.

"Remarkable for its inclusiveness, this historical novel is head and shoulders above most of its contemporaries."—New York Times