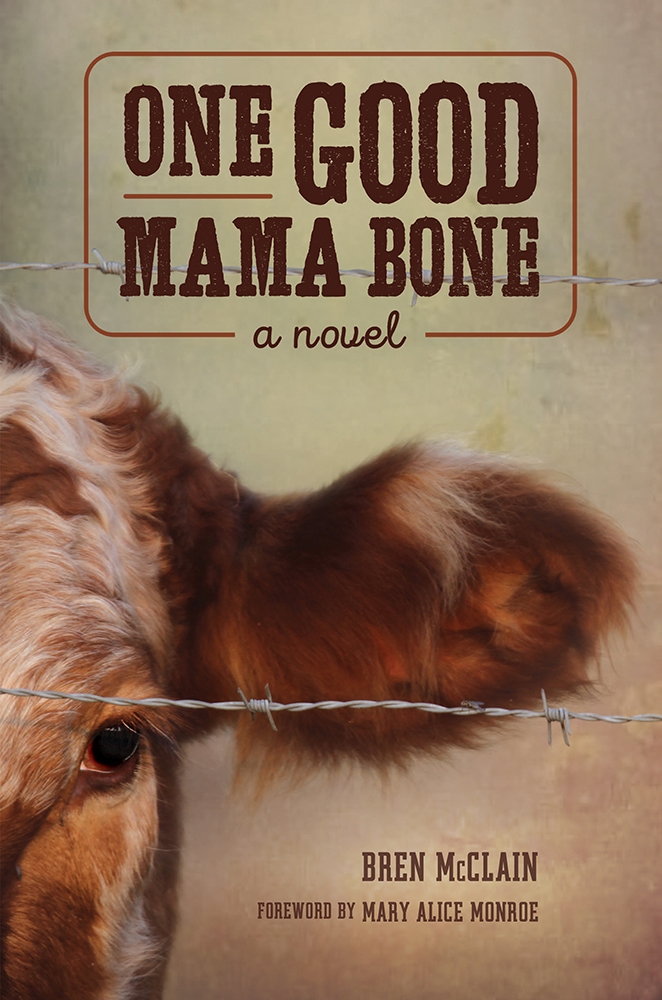 Set in early 1950s rural South Carolina, One Good Mama Bone chronicles Sarah Creamer's quest to find her "mama bone," after she is left to care for a boy who is not her own but instead is the product of an affair between her husband and her best friend and neighbor, a woman she calls "Sister." When her husband drinks himself to death, Sarah, a dirt-poor homemaker with no family to rely on and the note on the farm long past due, must find a way for her and young Emerson Bridge to survive. But the more daunting obstacle is Sarah's fear that her mother's words, seared in her memory since she first heard them at the age of six, were a prophesy, "You ain't got you one good mama bone in you, girl."

When Sarah reads in the local newspaper that a boy won $680 with his Grand Champion steer at the recent 1951 Fat Cattle Show & Sale, she sees this as their financial salvation and finds a way to get Emerson Bridge a steer from a local farmer to compete in the 1952 show. But the young calf is unsettled at Sarah's farm, crying out in distress and growing louder as the night wears on. Some four miles away, the steer's mother hears his cries and breaks out of a barbed-wire fence to go in search of him. The next morning Sarah finds the young steer quiet, content, and nursing a large cow. Inspired by the mother cow's act of love, Sarah names her Mama Red. And so Sarah's education in motherhood begins with Mama Red as her teacher.

But Luther Dobbins, the man who sold Sarah the steer, has his sights set on winning too, and, like Sarah, he is desperate, but not for money. Dobbins is desperate for glory, wanting to regain his lost grand-champion dynasty, and he will stop at nothing to win. Emboldened by her lessons from Mama Red and her budding mama bone, Sarah is committed to victory even after she learns the winning steer's ultimate fate. Will she stop at nothing, even if it means betraying her teacher?

McClain's writing is distinguished by a sophisticated and detailed portrayal of the day-to-day realities of rural poverty and an authentic sense of time and place that marks the best southern fiction. Her characters transcend their archetypes and her animal-as-teacher theme recalls the likes of Water for Elephants and The Art of Racing in the Rain. One Good Mama Bone explores the strengths and limitations of parental love, the healing power of the human-animal bond, and the ethical dilemmas of raising animals for food.

Bren McClain was born and raised in Anderson, South Carolina, on a beef cattle and grain farm. She has a degree in English from Furman University; is an experienced media relations, radio, and television news professional; and currently works as a communications confidence coach. She is a two-time winner of the South Carolina Fiction Project and the recipient of the 2005 Fiction Fellowship by the South Carolina Arts Commission. McClain won the 2016 William Faulkner–William Wisdom Novel-in-Progress for "Took" and was a finalist in the 2012 Pirate's Alley Faulkner Award for Novel-in-Progress for One Good Mama Bone. This is McClain's first novel. Visit her website at http://www.brenmcclain.com.

"McClain brings forth a story that aches and pulses."—IN Magazine

"The 1950s Deep South comes alive in this folkloric tale of love, sacrifice, and redemption."—Washington Independent Review of Books

"The plot and McClain's deeply developed characters are matched by her language. It is both realistic and poetic, simple and eloquent at once, and it will draw you in quickly and completely."—Sumter Item

"First-time novelist McClain draws on her family's history in the rural South to create a cast of deeply relatable characters, both human and animal, who readers will find themselves rooting for until the very last page."—Booklist (starred review)

"It's a novel with a heart-breaking beginning whose conclusion is morally and emotionally satisfying."—Southern Literary Review

"Beautiful book? You bet, and one you'll love."—Lake Country Now

"Among other kudos, McClain's novel was named a 2017 Great Group Reads selection by the Women's National Book Association, and long listed for The Crook's Corner Book Prize Foundation for the best debut novel set in the American South."—lcweekly.com

"McClain's first novel resists predictability and instead weaves together questions about poverty, class, violence, and religion. . . . A thought-provoking story about families and the animals who sustain them."—Kirkus Reviews

"Beautifully written and so descriptive of life in the rural South."—Girl Who Reads

"Bren McClain's brilliant and ravishingly moving novel speaks eloquently for all of us who find our deepest humanity intimately connected with all the sentient creatures around us. Humane and universal, One Good Mama Bone is an instant classic."—Robert Olen Butler, author of the Pulitzer Prize-winning short-story collection, A Good Scent from a Strange Mountain

"One Good Mama Bone is everything that Bren [McClain] is—smart, confident, unflinchingly honest, witty, wise, and possessing a reassuring wisdom and kindness that carries the reader from the story's heartbreaking beginnings to a morally and emotionally satisfying conclusion. McClain's debut novel is a tour de force! . . . This is a novel that just might break your heart, and it might well heal it too, but with both acts Bren McClain will remind you of why each of us is entrusted with a heart in the first place."—Mary Alice Monroe, from the foreword

"Emotional bonds between humans and animals have long been written about, but never has the bond between a woman and a mother cow been placed front and center. It's about time. The world is ready for this true portrait of a mother cow's compassion and the lessons she has to teach us all. This is an important story whose time has come."—Gene Baur, president and co-founder of Farm Sanctuary

"Bren McClain writes of elemental things with grace, wisdom, and power. One Good Mama Bone speaks with a quiet authority that comes through on every page."—Ben Fountain, author of Billy Lynn's Long Halftime Walk

"One Good Mama Bone brilliantly, yet softly, addresses the deep connection between us and the animals in our world Animal lovers, southern fiction fans, and those who simply like a well-told story will devour One Good Mama Bone just as they would the best home-made biscuits and gravy."—Hungry for Good Books blog