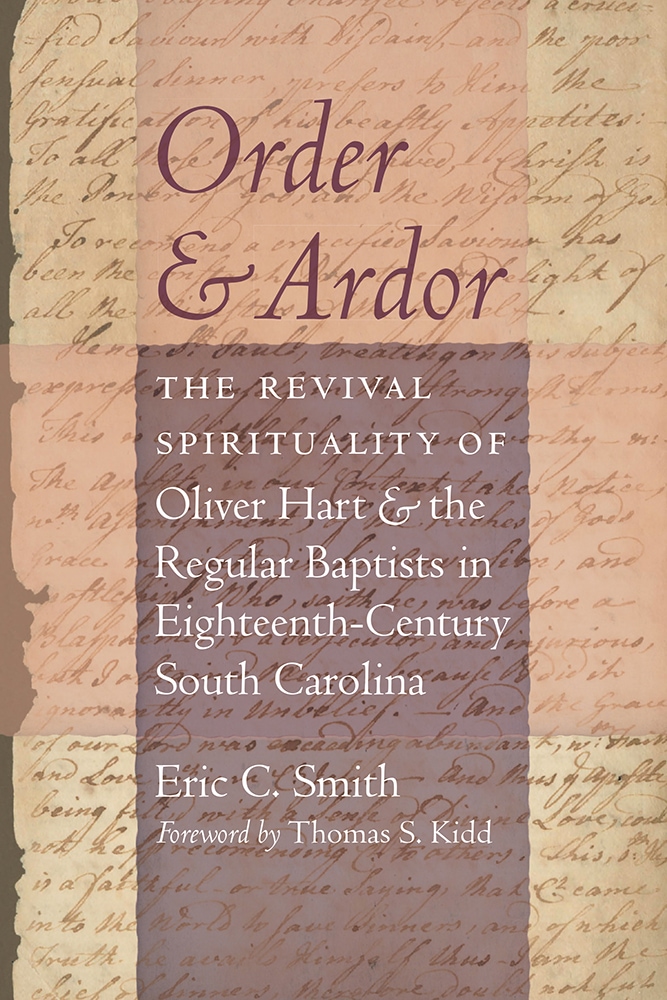 The origins of the Southern Baptist Convention, the world's largest Protestant denomination, is most often traced back to the colorful, revivalist Separate Baptist movement that rose out of the Great Awakening in the mid-1700s. During that same period the American South was likewise home to the often-overlooked Regular Baptists, who also experienced a remarkable revitalization and growth. Regular Baptists combined a concern for orderly doctrine and church life with the ardor of George Whitefield's evangelical awakening. In Order and Ardor, Eric C. Smith examines the vital role of Regular Baptists through the life of Oliver Hart, pastor of First Baptist Church in Charleston, South Carolina, a prominent patriot during the American Revolution, and one of the most important pioneers of American Baptists and American evangelicalism.

In this first book-length study of Hart's life and ministry, Smith reframes Regular Baptists as belonging to an influential revival movement that contributed significantly to creating the modern Southern Baptist denomination, challenging the widely held perception that they resisted the Great Awakening. During Hart's thirty-year service as the pastor of First Baptist Church, the Regular Baptists incorporated evangelical and revivalist values into their existing doctrine. Hart encouraged cooperative missions and education across the South, founding the Charleston Baptist Association in 1751 and collaborating with leaders of other denominations to spread evangelical revivalism.

Order and Ardor analyzes the most intense, personal experience of revival in Hart's ministry—an awakening among the youths of his own congregation in 1754 through the emergence of a vibrant thirst for religious guidance and a concern for their own souls. This experience was a testimony to Hart's revival piety—the push for evangelical Calvinism. It reinforced his evangelical activism, hallmarks of the Great Awakening that appear prominently in Hart's diaries, letters, sermon manuscripts, and other remaining documents.

Extensively researched and written with clarity, Order and Ardor offers an enlightened view of eighteenth-century Regular Baptists. Smith contextualizes Hart's life and development as a man of faith, revealing the patterns and priorities of his personal spirituality and pastoral ministry that identify him as a critically important evangelical revivalist leader in the colonial lower South.

"Smith's exploration of Hart's life and work has broad ramifications . . . readers will find in Smith's work a helpful reminder that no historical category is sacrosanct, and that no Baptist tradition is monolithic."—Baptist History & Heritage

"Order and Ardor: The Revival Spirituality of Oliver Hart & the Regular Baptists in Eighteenth-Century South Carolina challenges many cherished beliefs about revivalism and Baptists in the eighteenth-century...Smith writes with clarity and grace. He makes Hart believable without over-accentuating his strengths or minimizing his weaknesses a fine book that challenges much of what is assumed with respect to Baptists and revivalism in the eighteenth-century South."—Church History

"With Order and Ardor, Smith makes a notable contribution to the fields of Baptist and evangelical studies, particularly the importance of the eighteenth-century South. He introduces readers to an oft-overlooked early American father in the faith. He connects Oliver Hart to the larger movements around him in a way denied by Baptist historians in the recent past."—Fides et Historia