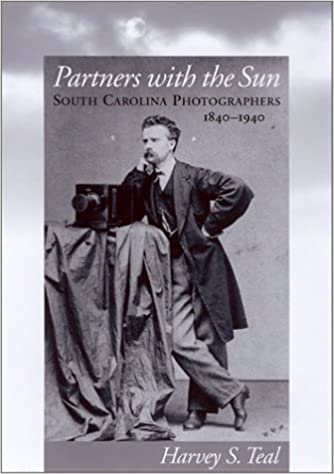 Partners With the Sun

Partners with the Sun recounts the history of the men and women who captured a century of South Carolina images, from photography's introduction in the state through 1940. Beginning with William H. Ellet, a South Carolina College professor who was the first in the state to experiment with the new technology, Harvey S. Teal records carefully researched biographical information about six hundred professional photographers who worked throughout South Carolina. He showcases their work with more than three hundred examples of daguerreotypes, ambrotypes, tintypes, cartes de visite, cabinets, stereographs, panoramas, and other types of photographs. While the images provide a one-hundred-year pictorial panorama of South Carolina, the biographical entries rescue from obscurity the men and women who made a business of recording the state's landscapes, streetscapes, architecture, people, social life, and economic endeavors.

Dividing the century into historical periods, Teal groups the photographers by the towns in which they operated studios. Additionally, he profiles amateur photographers who participated in significant projects, such as those who produced the more than three thousand photographs taken of the Penn School on St. Helena Island in Beaufort County. In response to the increasing interest in female photographers, African American photographers, photography as a business, and the production of picture postcards, stereographs, and panoramas, Teal devotes a chapter to each of these topics. He highlights local and national events of the century and chronicles advances in photographic technology, to place the photographers in their historical contexts.

"Partners with the Sun is a well-researched and skillfully illustrated book providing much-needed information about photographers working in South Carolina during the medium's first century. The volume fills a significant documentary void in the photographic history of a major southern state and contributes to a broader appreciation for the role of photographers in creating a record of the past."—Jerry Cotten, author of Light and Air: The Photography of Bayard Wootten

"In Partners with the Sun Harvey S. Teal has assembled a wonderfully rich resource for historians of South Carolina and for collectors of South Caorliniana. Carefully researched and clearly organized, it will be the standard reference work on the subject for years to come."—Walter Edgar, author of South Carolina: A History