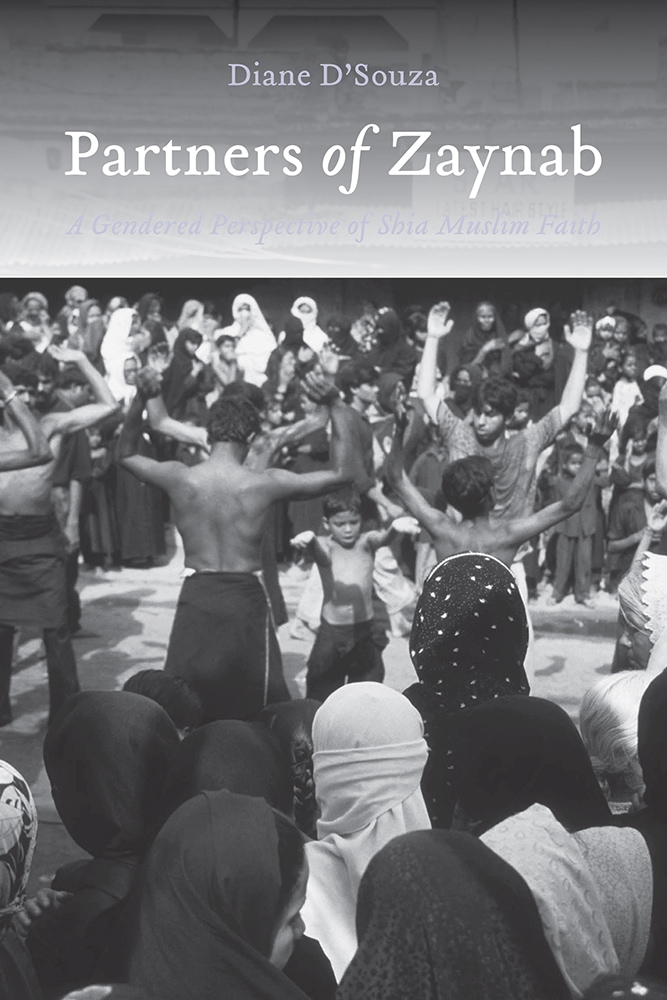 How do pious Shia Muslim women nurture and sustain their religious lives? How do their experiences and beliefs differ from or overlap with those of men? What do gender-based religious roles and interactions reveal about the Shia Muslim faith? In Partners of Zaynab, Diane D'Souza presents a rich ethnography of urban Shia women in India, exploring women's devotional lives through the lens of religious narrative, sacred space, ritual performance, leadership, and iconic symbols.

Religious scholars have tended to devalue women's religious expressions, confining them to the periphery of a male-centered ritual world. This viewpoint often assumes that women's ritual behaviors are the unsophisticated product of limited education and experience and even a less developed female nature. By illuminating vibrant female narratives within Shia religious teachings, the fascinating history of a shrine led by women, the contemporary lives of dynamic female preachers, and women's popular prayers and rituals of petition, Partners of Zaynab demonstrates that the religious lives of women are not a flawed approximation of male-defined norms and behaviors, but a vigorous, authentic affirmation of faith within the religious mainstream.

D'Souza questions the distinction between normative and popular religious behavior, arguing that such a categorization not only isolates and devalues female ritual expressions, but also weakens our understanding of religion as a whole. Partners of Zaynab offers a compelling glimpse of Muslim faith and practice and a more complete understanding of the interplay of gender within Shia Islam.


Diane D'Souza is the director of continuing education and of the Mission Institute at the Episcopal Divinity School in Cambridge, Massachusetts. She is widely published in the fields of gender, religion, interreligious dialogue, and peace building. D'Souza lived and worked in India for nearly twenty years, where she taught Islam and Christian-Muslim relations and conducted research on Muslim women's religious practices. She earned her doctorate in religious studies from Vrije University in Amsterdam, the Netherlands.

"This work makes a distinct contribution to our knowledge of Shia Islam in India , especially by virtue of its in-depth focus on women's collective devotional beliefs and activities, a female perspective on the religion that has been greatly neglected by most scholars in the past. It should be widely read, by both specialist and laypersons including college studentsfor its valuable insights into Islam more generally and its Shia, Indian and gender aspects in particular."—History of Religions

"Drawing on twenty years' residence in India, Diane D'Souza provides a closely observed analysis of Shia ritual as lived and practiced by women in the city of Hyderabad. Particularly appealing is how the author gives ample space for Hyderabadi women to describe their spirituality and religious self-understanding in their own words. This is original and compelling research, of interest not only to scholars in Islamic ritual and women's studies but also to general readers who want some sense of what it means to be a member of a devout Shia community. A sympathetic and highly readable account."—David Pinault, Santa Clara University, author of Horse of Karbala: Muslim Devotional Life in India and The Shiites: Ritual and Popular Piety in a Muslim Community

"South Asians are the largest ethnic group among the world's Muslims, and women hold up half of the sky. Unfortunately those lives and religious identities are often overlooked, or worse, ignored. This lovely book serves as a marvellous corrective, helping us to understand better the lives of Shi'i women in India."—Amir Hussain, professor of theological studies, Loyola Marymount University, and editor, Journal of the American Academy of Religion

"Having lived among Shia women in Hyderabad for close to two decades, D'Souza is able to offer readers an extensive, profound, unique and extraordinarily readable close-up view of women's religious practices and beliefs. At the same time, while never losing sight of the importance of these practices and beliefs in and of themselves, D'Souza shows how a detailed focus on the content of women's lives expands our understanding of religion cross-culturally and historically. I highly recommend this book."—Susan Sered, professor of sociology, Suffolk University

"Diane D'Souza provides a vivid account of women's devotional life in a contemporary Indian Shi'a community. It is unsurpassed in the details she provides of the ritual spaces and practices that bind them with each other and with esteemed female members of Ahl-e Bayt (the sacred household of Mohammad), particularly Fatima and Zaynab. This is a welcome addition to scholarship on Islamic devotionalism and women's religiosity that will be appreciated by non-specialists and specialists alike."—Juan E. Campo, University of California–Santa Barbara, author of Encyclopedia of Islam

"This richly detailed ethnographic and textual study of South Asian Ithna Ashari (Twelver) Shia Muslim women in Hyderabad, India, opens an insightful window into their spiritual lives, often marginalized as "popular" rather than "normative" expressions of religiosity in scholarly work on Muslims. D'Souza addresses these lacunae to good effect in questioning such a dichotomy while examining how an analysis of gendered ritual practice contributes to our overall understanding of lived Shia Muslim faith, precepts, and practices. By placing women's religious lives at the center, this work brings into relief women's agency and their leadership roles, their creation of sacred ritual space, and their use of religious icons to show how they, and the Shia faithful, construct meaning. Attentive to the larger contexts of Sunni Islam, Shia sacred history, Hindu-Muslim relations, and the social dimensions of ritual practices, this study is a welcome and useful addition to courses in Islam, Shi'ism, gender studies, and ritual studies."—Zayn Kassam, John Knox McLean Professor of Religious Studies, Pomona College