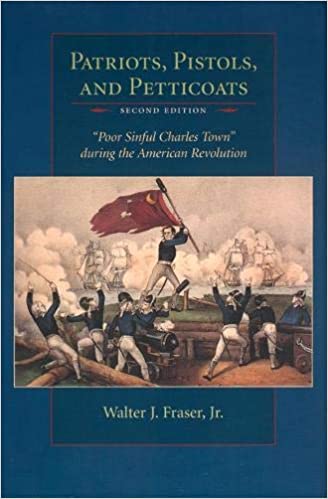 Patriots, Pistols, and Petticoats vividly portrays the lively—at times bawdy—atmosphere in Charleston during the Revolutionary War era. This brawling port city—the fourth largest in Britain's North American colonies and the largest in the South at the time of the Revolutionary War—boasted commerce, politics, cultural events, and entertainment as sophisticated as any found in America. From the city's taverns and streets to the drawing rooms of its elite, from its shipping trade to its agriculture to its political rivalries, Walter Fraser's thorough research and revealing anecdotes offer an entertaining and informative history of this distinguished city and its role in the colonial fight for independence.

Walter J. Fraser, Jr., is professor of history and chair of the history department at Georgia Southern University. Author of Charleston! Charleston!: A History of a Southern City, Fraser has coedited three books and published articles and reviews in publications such as Journal of American History, Journal of Southern History, South Carolina Historical Magazine, and Georgia Historical Quarterly.

"A rich and fascinating tapestry."—L. Wayne Jordan, College of Charleston

"A well-rounded history of a decade of Charleston history that played a major role in the founding of the nation."—Jack Leland, Charleston's News and Courier

"A good, sound introduction to the Revolutionary period in Charleston; this is popular history, accurate and readable."—Robert M. Weir, University of South Carolina

"[Charleston's] fall in 1780 was England's finest hour and America's worst defeat of the Revolutinary War. But the American cause persisted: in the devotion of rebels drawn from all classes, in the defiance of residents of British-occupied Charles Towne, and in the bloody civil war in the Carolina backcountry, that dragged on long after Cornwallis surrendered at Yorktown."—Jamie W. Moore, The Citadel