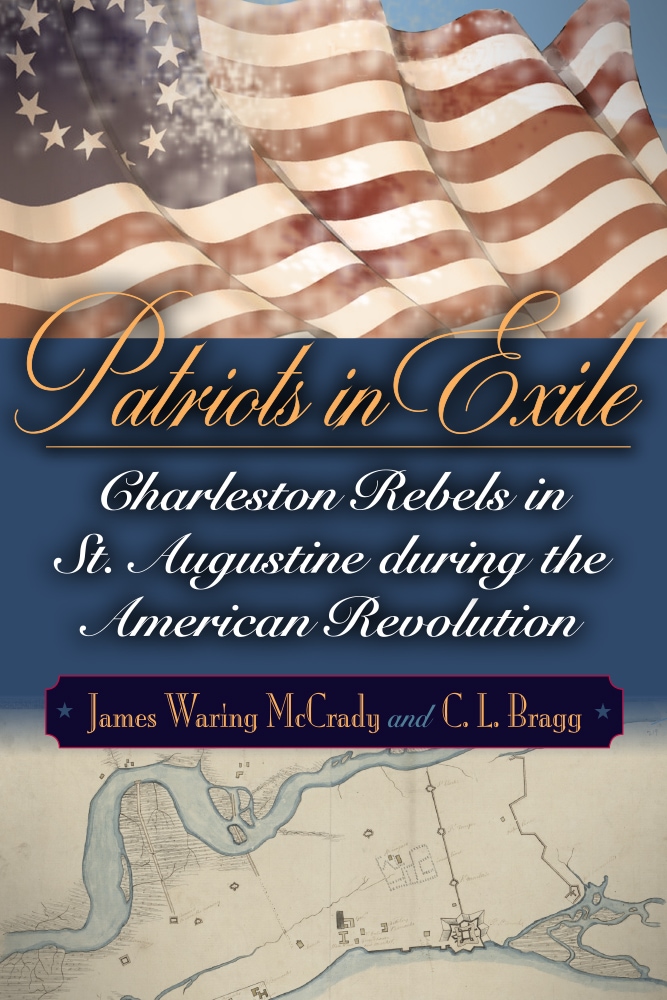 Charleston Rebels in St. Augustine during the American Revolution

In the months following the May 1780 capture of Charleston, South Carolina, by combined British and loyalist forces, British soldiers arrested sixty-three paroled American prisoners and transported them to the borderland town of St. Augustine, East Florida—territory under British control since the French and Indian War. In Patriots in Exile, James Waring McCrady and C. L. Bragg chronicle the banishment of these elite southerners, the hardships endured by their families, and the plight of the enslaved men and women who accompanied them, as well as the motives of their British captors.

McCrady and Bragg thoroughly examine the exile from the standpoint of the British who governed occupied Charleston, the families left behind, the armies in the field, the Continental Congress, and finally the Jacksonboro Assembly of January and February 1782. Using primary sources and archival materials, the authors develop biographical sketches of each exile and illuminate important facets of the American Revolution's southern theater. While they shared a common fate, the exiles were a diverse lot of tradesmen, artisans, prominent civilians, and military officers—among them three signers of the Declaration of Independence. Although they had clear socioeconomic differences, most were unrepentant patriots.

In this first comprehensive examination and narrative history of these patriots, McCrady and Bragg reveal how the exiles navigated their new surroundings within the context of a revolutionary conflict that involved various imperial powers of the Old World—Britain, France, and Spain—and American colonists seeking to create an independent nation.

C. L. "Chip" Bragg is the author or co-author of Distinction in Every Service: Brigadier General Marcellus A. Stovall, C.S.A.; the critically acclaimed Never for Want of Powder: The Confederate Powder Works in Augusta, Georgia; Crescent Moon over Carolina: William Moultrie and American Liberty; and Martyr of the American Revolution: The Execution of Isaac Hayne, South Carolinian.

"Bragg and McCrady have highlighted a frequently neglected topic of the Revolutionary War in the South: the travails of men who were torn from families and familiar surroundings, often not knowing what awaited them in this forced removal from South Carolina. Engaging and original."—Carl Borick, Charleston Museum

"A detailed, fascinating account of a neglected facet of the history of the American Revolution in South Carolina."—Walter Edgar, author of South Carolina: A History

"Patriots in Exile fills a significant gap in the history of the American Revolution and broadens the perspective by exploring events that took place outside the limits of the thirteen colonies. This book will appeal to both academic and general readers, particularly those whose interests are focused on the South."—Jim Piecuch, author of Three Peoples, One King

"McCrady and Bragg shed new light on how in 1780 the patriot elite of Charleston, South Carolina, came to be exiled to one of the most isolated corners of the British empire. While not quite a gulag or Guantanamo Bay, St. Augustine served a similar function as a place where the British could make disappear individuals deemed to be dangerous enemies of the state."—David K. Wilson, author of The Southern Strategy: Britain's Conquest of South Carolina and Georgia, 1775–1780

"Patriots in Exile: Charleston Rebels in St. Augustine during the American Revolution provides an interesting narrative describing the exile of sixty-three rebels from Charleston to St. Augustine... a good contribution to the literature on the southern theater of the war that will appeal to a broad variety of readers beyond academia."—Journal of Southern History