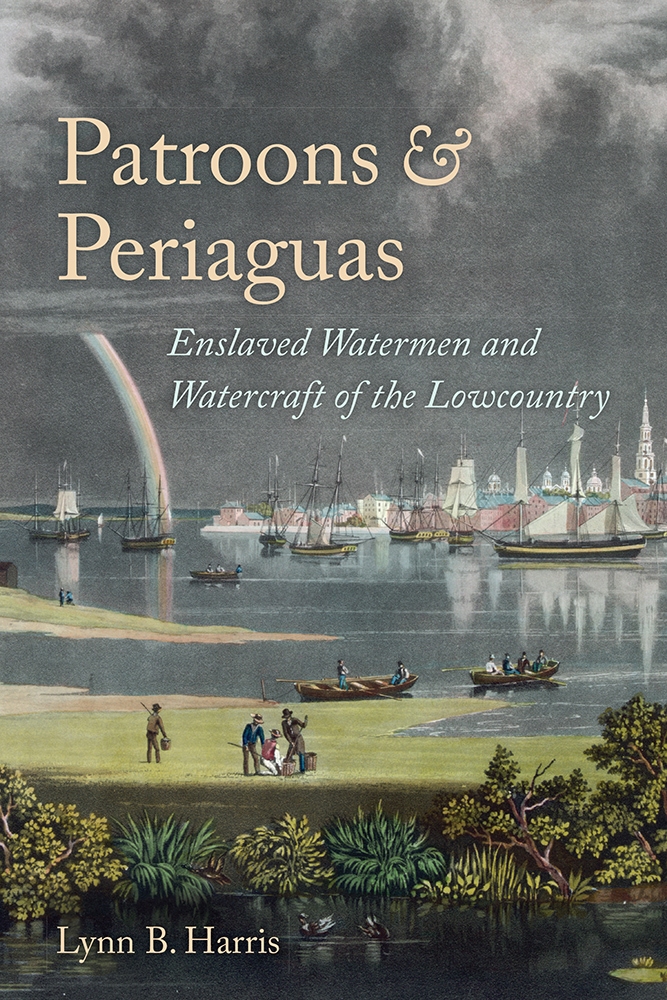 Enslaved Watermen and Watercraft of the Lowcountry

Patroons and Periaguas explores the intricately interwoven and colorful creole maritime legacy of Native Americans, Africans, enslaved and free African Americans, and Europeans who settled along the rivers and coastline near the bourgeoning colonial port city of Charleston, South Carolina.

Colonial South Carolina, from a European perspective, was a water-filled world where boatmen of diverse ethnicities adopted and adapted maritime skills learned from local experiences or imported from Africa and the Old World to create a New World society and culture. Lynn B. Harris describes how they crewed together in galleys as an ad hoc colonial navy guarding settlements on the Edisto, Kiawah, and Savannah Rivers, rowed and raced plantation log boats called periaguas, fished for profits, and worked side by side as laborers in commercial shipyards building sailing ships for the Atlantic coastal trade, the Caribbean islands, and Europe. Watercraft were of paramount importance for commercial transportation and travel, and the skilled people who built and operated them were a distinctive class in South Carolina.

Enslaved patroons (boat captains) and their crews provided an invaluable service to planters, who had to bring their staple products—rice, indigo, deerskins, and cotton—to market, but they were also purveyors of information for networks of rebellious communications and illicit trade. Harris employs historical records, visual images, and a wealth of archaeological evidence embedded in marshes, underwater on riverbeds, or exhibited in local museums to illuminate clues and stories surrounding these interactions and activities. A pioneering underwater archaeologist, she brings sources and personal experience to bear as she weaves vignettes of the ongoing process of different peoples adapting to each other and their new world that is central to our understanding of the South Carolina maritime landscape.


Lynn B. Harris is an assistant professor in maritime studies at East Carolina University in Greenville, North Carolina. Harris was previously an underwater archaeologist with the South Carolina Institute of Archaeology and Anthropology, facilitating education and outreach programs within the local scuba-diving communities about their underwater heritage, while researching and documenting historic shipwreck sites and canoes in the rivers and along the coastline of the state.

"Lynn Harris has written a carefully researched study, drawing on archaeological, manuscript, material culture, and visual culture resources to argue that the water-based culture in the South Carolina Lowcountry from early settlement to the American Revolution was truly multicultural. Just as Charles Joyner argued in Down by the Riverside for a fusing of European and African practices into a new creole culture of rice cultivation, Harris demonstrates through examination of boat design, boat building techniques, and boat use on the rivers and bays along the South Carolina coast that African as well as indigenous American practices shaped the very forms of the periaguas used by planters to bring Carolina's fur and rice commodities to market and gave the enslaved patroons who built and mastered them a limited degree of autonomy."—Constance B. Schulz, professor emeritus, department of history, University of South Carolina

"A remarkable work that properly describes the melding of Native American, African, and European nautical traditions that created South Carolina's coastal shipping heritage. Harris's fine account of the evolution of the people and vessels of South Carolina is an exceptional contribution to the state's history and understanding the connection between South Carolina and the greater Atlantic world."—Stephen R. Wise, author of Lifeline of the Confederacy: Blockade Running during the Civil War