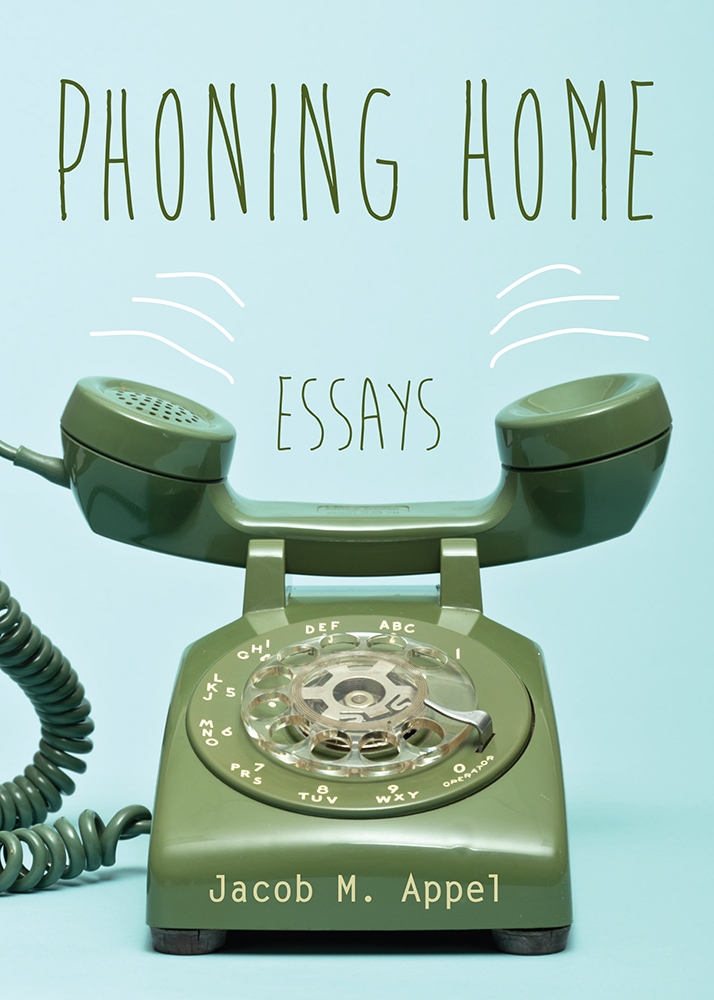 Phoning Home is a collection of entertaining and thought-provoking essays featuring the author's quirky family, his Jewish heritage, and his New York City upbringing. Jacob M. Appel's recollections and insights, informed and filtered by his advanced degrees in medicine, law, and ethics, not only inspire nostalgic feelings but also offer insight into contemporary medical and ethical issues.

At times sardonic and at others self-deprecating, Appel lays bare the most private aspects of his emotional life. "We'd just visited my grandaunt in Miami Beach, the last time we would ever see her. I had my two travel companions, Fat and Thin, securely buckled into the backseat of my mother's foul-tempered Dodge Dart," writes Appel of his family vacation with his two favorite rubber cat toys. Shortly thereafter Fat and Thin were lost forever—beginning, when Appel was just six years old, what he calls his "private apocalypse."

Both erudite and full-hearted, Appel recounts storylines ranging from a bout of unrequited love gone awry to the poignant romance of his grandparents. We learn of the crank phone calls he made to his own family, the conspicuous absence of Jell-O at his grandaunt's house, and family secrets long believed buried. The stories capture the author's distinctive voice—a blend of a physician's compassion and an ethicist's constant questioning.


Jacob M. Appel is a physician, attorney, and bioethicist based in New York City. He is the author of the novel The Man Who Wouldn't Stand Up, the short fiction collection Scouting for the Reaper, and more than two hundred published stories. He also writes about the nexus of law and medicine, contributing to many leading publications including the New York Times, San Francisco Chronicle, Boston Globe, Chicago Tribune, and Detroit Free Press. His work has been nominated for the O. Henry Award, Best American Short Stories, Best American Non-required Reading, Best American Essays, and the Pushcart Prize anthology on many occasions.

"In his essays, Jacob Appel vividly evokes a younger version of himself, whom he treats with both cruelty and affection. His essays are gentle, crisp, self-mocking, and sneakily absurd. In each essay, he reaches some sort of equilibrium, a kind of intellectual epiphany that doesn't come easily; instead, it feels raw and hard-earned."—Rachel Aviv, staff writer at the New Yorker

"In essay after essay, Appel holds the reader's attention through a combination of wit, self-deprecation, wisdom, incisive knowledge and a deep sense of compassion and empathy for his fellow human beings. Phoning Home is a worthy addition to the pantheon of great American essays."—Girija Sankar, New Pages Book Reviews

"Phoning Home Essays is a book for the home library, the English teacher or professor's reading list, and as well, it is for anyone who appreciates a compilation of rapid reads presented in an easy to tuck into brief case or carry bag for immediate perusal."—Midwest Book Review