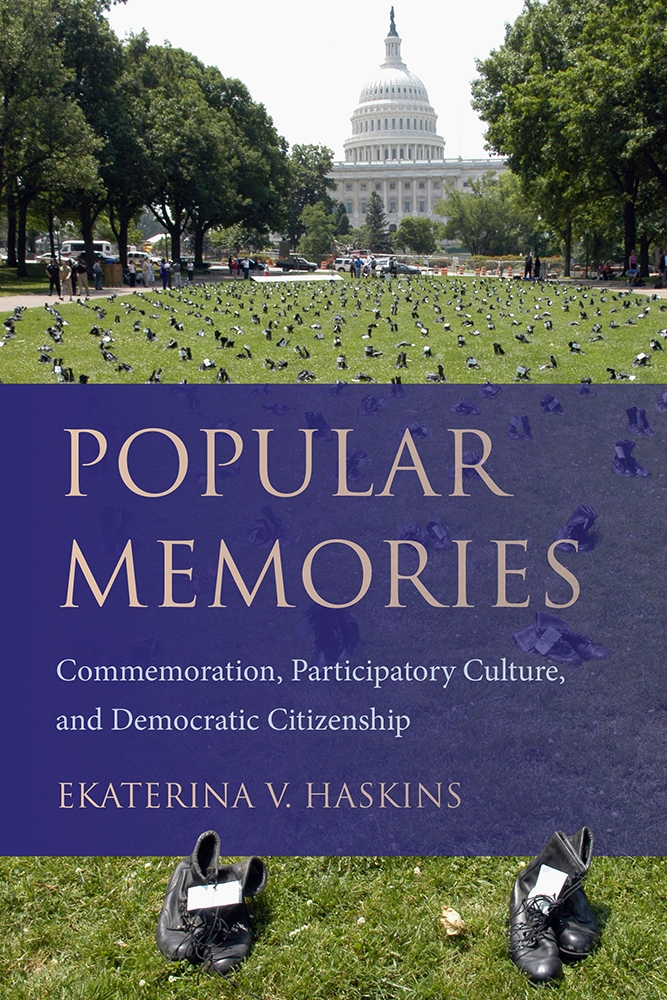 In the last three decades ordinary Americans launched numerous grassroots commemorations and official historical institutions became more open to popular participation. In this first book-length study of participatory memory practices, Ekaterina V. Haskins critically examines this trend by asking how and with what consequences participatory forms of commemoration have reshaped the rhetoric of democratic citizenship.

Approaching commemorations as both representations of civic identity and politically consequential sites of stranger interaction, Popular Memories investigates four distinct examples of participatory commemoration: the United States Postal Service's "Celebrate the Century" stamp and education program, the September 11 Digital Archive, the first post-Katrina Carnival in New Orleans, and a traveling memorial to the human cost of the Iraq War.

Despite differences in sponsorship, genre, historical scope, and political purpose, all of these commemorations relied on voluntary participation of ordinary citizens in selecting, producing, or performing interpretations of distant or recent historical events. These collectively produced interpretations—or popular memories—in turn prompted interactions between people, inviting them to celebrate, to mourn, or to bear witness. The book's comparison of the four case studies suggests that popular memories make for stronger or weaker sites of civic engagement depending on whether or not they allow for public affirmation of the individual citizen's contribution and for experiencing alternative identities and perspectives. By systematically accounting for grassroots memory practices, consumerism, tourism, and rituals of popular identity, Haskins's study enriches our understanding of contemporary memory culture and citizenship.


Ekaterina V. Haskins is an associate professor of rhetoric in the Department of Communication and Media at Rensselaer Polytechnic Institute. She is the author of the award-winning book Logos and Power in Isocrates and Aristotle and numerous essays on rhetoric, visual culture, and public memory. Haskins lives in Troy, New York, where she serves on the board of trustees of the Rensselaer County Historical Society.

"Popular Memories provides insight into the tensions between communal acts that make public memory an ongoing project of the people, and larger forces that sometimes highjack memorializing moments in the service of state or private concerns. Through deft readings of vibrant, and sometimes problematic, invitations to memorialize, Ekaterina Haskins offers a provocative exploration of the possibilities of participatory forms of memorializing for ordinary people to engage in meaningful practices of citizenship beyond voting. At a time when public spheres appear to be either moribund or mundane, Haskins shows how significant moments and events can enlist publics at once diverse and inclusive, and capacitated to shape public memory."—Gerard A. Hauser, College Professor Emeritus of Distinction in Rhetoric, University of Colorado Boulder

"Popular Memories is a vital addition to the rhetorical study of public memory in that it draws attention to the often neglected elements of citizen engagement and participation. By exploring different forms of participatory commemoration, Haskins demonstrates the ways that engagement can be energized or minimized and the potential impact such engagement might have on democratic culture."—Kendall Phillips, professor of communication and rhetorical studies, Syracuse University

"I was absolutely enthralled by Haskin's book. It was engagingly argued, exhaustively researched, elegantly written, and theoretically transformative. Her narrative reconstruction of the case studies drew me in, offering both broad historical context and vivid contemporary detail. Instead of rehashing old distinctions between vernacular and official, or ephemeral and physical, she focuses our attention on the relationship between commemorative practices and citizenship, asking, 'What modes of civic engagement does this participatory experience promote?"—Catherine H. Palczewski, professor of communication studies, University of Northern Iowa