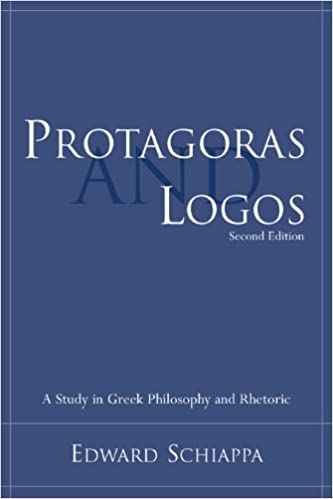 A Study in Greek Philosophy and Rhetoric

Protagoras and Logos brings together in a meaningful synthesis the contributions and rhetoric of the first and most famous of the Older Sophists, Protagoras of Abdera. Most accounts of Protagoras rely on the somewhat hostile reports of Plato and Aristotle. By focusing on Protagoras's own surviving words, this study corrects many long-standing misinterpretations and presents significant facts: Protagoras was a first-rate philosophical thinker who positively influenced the theories of Plato and Aristotle, and Protagoras pioneered the study of language and was the first theorist of rhetoric. In addition to illustrating valuable methods of translating and reading fifth-century B.C.E. Greek passages, the book marshals evidence for the important philological conclusion that the Greek word translated as rhetoric was a coinage by Plato in the early fourth century.

In this second edition, Edward Schiappa reassesses the philosophical and pedagogical contributions of Protagoras. Schiappa argues that traditional accounts of Protagoras are hampered by mistaken assumptions about the Sophists and the teaching of the art of rhetoric in the fifth century. He shows that, contrary to tradition, the so-called Older Sophists investigated and taught the skills of logos, which is closer to modern conceptions of critical reasoning than of persuasive oratory. Schiappa also offers interpretations for each of Protagoras's major surviving fragments and examines Protagoras's contributions to the theory and practice of Greek education, politics, and philosophy. In a new afterword Schiappa addresses historiographical issues that have occupied scholars in rhetorical studies over the past ten years, and throughout the study he provides references to scholarship from the last decade that has refined his views on Protagoras and other Sophists.

Edward Schiappa holds the Paul W. Frenzel Chair of Liberal Arts at the University of Minnesota in Minneapolis, where he is professor and director of graduate studies in the Department of Communication Studies. His other books include Defining Reality: Definitions and the Politics of Meaning and The Beginnings of Rhetorical Theory in Classical Greece. The editor of Warranting Assent: Case Studies in Argument Evaluation and Landmark Essays in Classical Greek Rhetoric, he is the past editor of the journal Argumentation and Advocacy. Schiappa lives in St. Paul, Minnesota.

"We know much more about Protagoras than we once imagined because of Edward Schiappa's insightful scholarship, and just as importantly, we have been forced to address and assess our own scholarly assumptions in a way that can only improve both the questions we ask and the answers we ultimately discover."—Rhetorica

"An important contribution to the ongoing work of revising earlier views about the Sophistic movement . . . it ought to encourage more work on Protagoras and the other Sophists as individual teachers and thinkers."—Ancient Philosophy