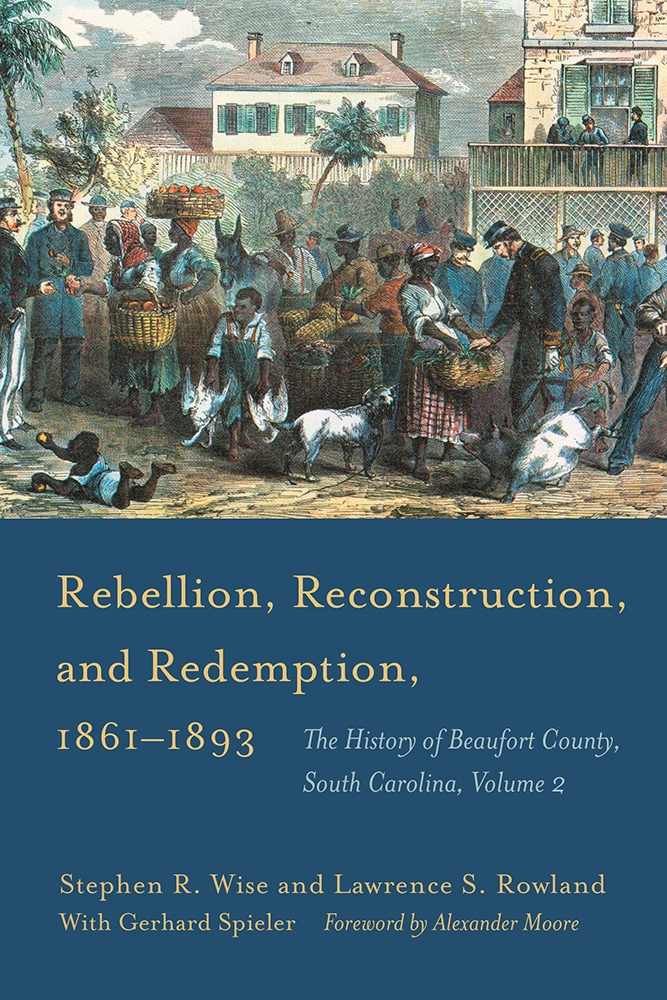 In Rebellion, Reconstruction, and Redemption, 1861-1893, the second of three volumes on the history of Beaufort County, Stephen R. Wise and Lawrence S. Rowland offer details about the district from 1861 to 1893, which influenced the development of the South Carolina and the nation. During a span of thirty years the region was transformed by the crucible of war from a wealthy, slave-based white oligarchy to a county where former slaves dominated a new, radically democratic political economy.

This volume begins where volume I concluded, the November 1861 Union capture and occupation of the Sea Islands clustered around Port Royal Sound, and the Confederate retreat and re-entrenchment on Beaufort District's mainland, where they fended off federal attacks for three and a half years and vainly attempted to maintain their pre-war life. In addition to chronicling numerous military actions that revolutionized warfare, Wise and Rowland offer an original, sophisticated study of the famous Port Royal Experiment in which United States military officers, government officials, civilian northerners, African American soldiers, and liberated slaves transformed the Union-occupied corner of the Palmetto State into a laboratory for liberty and a working model of the post-Civil War New South.

The revolution wrought by Union victory and the political and social Reconstruction of South Carolina was followed by a counterrevolution called Redemption, the organized campaign of Southern whites, defeated in the war, to regain supremacy over African Americans. While former slave-owning, anti-black "Redeemers" took control of mainland Beaufort County, they were thwarted on the Sea Islands, where African Americans retained power and kept reaction at bay. By 1893, elements of both the New and Old South coexisted uneasily side by side as the old Beaufort District was divided into Beaufort and Hampton counties. The Democratic mainland reverted to an agricultural-based economy while the Republican Sea Islands and the town of Beaufort underwent an economic boom based on the phosphate mining industry and the new commercial port in the lowcountry town of Port Royal.

Lawrence S. Rowland is distinguished professor emeritus of history at the University of South Carolina at Beaufort and past president of the South Carolina Historical Society. He is the coauthor of The History of Beaufort County: South Carolina: Volume 1, 1514–1861. Rowland lives on Dataw Island, South Carolina, with his wife, the former Margot Hunter. They have three grown children.

Gerhard Spieler (1920–2012) was a historian who wrote extensively about Beaufort County on topics such as local churches, cemeteries, and military forts, and he was also a researcher of the area's African American history. Spieler wrote a weekly column for the Beaufort Gazette and a column known as "Historically Speaking" for Sea Island Scene. He was a military veteran of World War II and was married to Ruth Spieler.

"The authors of this volume and its predecessor have lifted Beaufort County out of the parochial realm of local history and produced a landmark that stands alone as a tour-de-force of concept and execution. Events in Beaufort County in the 1860s had a national impact in the Civil War and Reconstruction, and so should this series make its mark on the historiography of the era."—William C. Davis, professor of history and director, Virginia Center for Civil War Studies, Virginia Tech

"This is local history at its best, an insightful and original account of the Civil War, Reconstruction, and its aftermath in a county where all the questions arising from the end of slavery—access to land, civil rights, political power, race relations, and the promise and betrayal of freedom—were played out. Essential reading for anyone interested in that turbulent era"—Eric Foner, DeWitt Clinton Professor of History, Columbia University

"Unique in South Carolina, Beaufort County was the locale of the famous Port Royal Experiment during the Civil War and the center of black political leadership during Reconstruction and after. This detailed account of those years unravels the complex military, social, political, and economic history of a region that remains today a focus of African-American culture."—James M. McPherson, George Henry Davis 1886 Professor of American History, Emeritus, Princeton University

"I have waited almost two decades for this second volume of a trilogy on Beaufort County, South Carolina. And, it was well worth the wait! In this magisterial work, Larry Rowland and Steve Wise have continued the saga of one of the state's most fascinating locales. From the 'Day of the big Gun Shoot' on November 7, 1861, through the Port Royal Experiment and Reconstruction, to the election of 1892 and the high point of inter-racial fusion politics, this is a riveting story of a place and its people."—Walter Edgar

"Specialists will rejoice that Beaufort County has a new standard volume for this period, and Low Country enthusiasts will enjoy this exhaustive treatment of the county's history an extraordinary contribution to the scholarship of the region. Wise and Rowland conclusively prove how the war "forever changed Beaufort County"."—The Journal of American History

"Wise and Rowland succeed in combining their easy familiarity with the South Carolina low country's human and geographical terrain with a keen sense of how local circumstances shaped, and were profoundly transformed by, the wider upheaval inaugurated by war and the disintegration of slavery... this exemplary volume will stand as both an indispensable reference source and a pioneering and perceptive study of one of the most strategically situated southern communities during and after the Civil War."—The South Carolina Historical Magazine