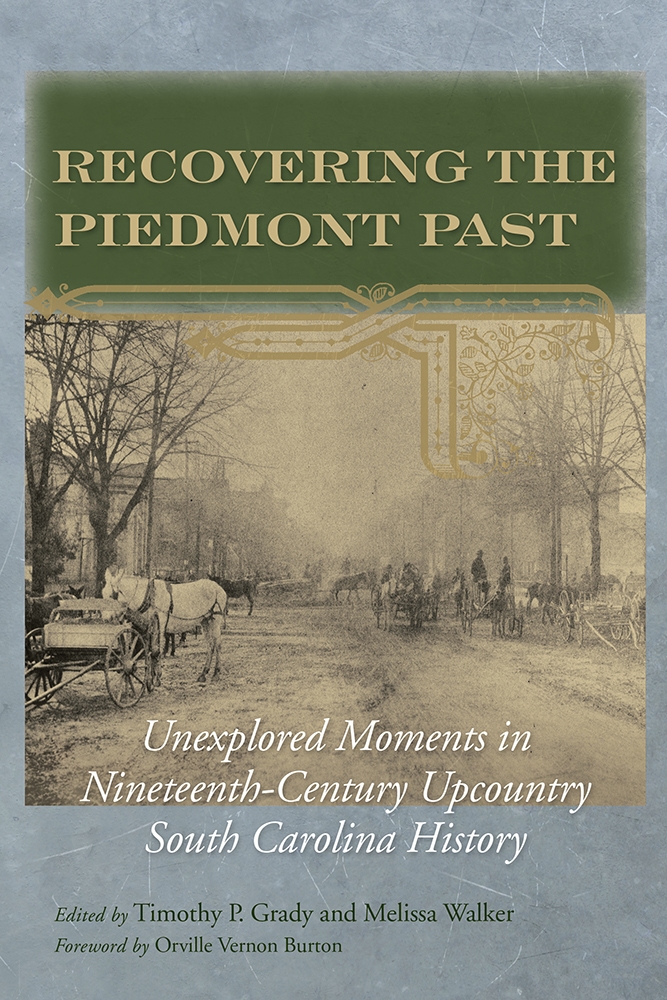 Recovering the Piedmont Past, Volume 1

edited by Timothy P. Grady and Melissa A. Walker

The history of South Carolina's lowcountry has been well documented by historians, but the upcountry—the region of the state north and west of Columbia and the geologic fall line—has only recently begun to receive extensive scholarly attention. The essays in this collection provide a window into the social and cultural life of the upstate during the nineteenth century. The contributors explore topics such as the history of education in the region, post-Civil War occupation by Union troops, upcountry tourism, Freedman's Bureau's efforts to educate African Americans, and the complex dynamics of lynch mobs in the late nineteenth century.

Recovering the Piedmont Past illustrates larger trends of social transformation occurring in the region at a time that shaped religion, education, race relations and the economy well into the twentieth century. The essays add depth and complexity to our understanding of nineteenth century southern history and challenge accepted narratives about a homogeneous South. Ultimately each of the eight essays explores little known facets of the history of upcountry South Carolina in the nineteenth century.

The collection includes a foreword by Orville Vernon Burton, professor of history and director of the Cyberinstitute at Clemson University.


Timothy P. Grady, a professor of history at the University of South Carolina Upstate in Spartanburg, received his doctorate from the College of William and Mary. He is the author of Anglo-Spanish Rivalry in Colonial Southeast America, 1650–1720.

Melissa Walker is the George Dean Johnson, Jr., Professor of History at Converse College in Spartanburg and the author or editor of six books on Southern history. In 2007 Walker was the CASE/Carnegie Foundation South Carolina Professor of the Year.

"This book is an important contribution to the cache of scholarship on South Carolina history and is also a work that testifies to the value of regional and local history."—Courtney L. Tollison, West Virginia History

"This cohesive collection provides a good introduction to this geographical area of South Carolina and its history. It also enriches readers' understanding of 19th-century southern history as a whole."—Choice Magazine

"All history is local history somewhere, and no history, properly understood, has merely local significance... Thoroughness of research and quality of prose are constants throughout the collection. One hopes other regional scholars will be inspired to join in the great conversation of upcountry studies."—Journal of Southern History

"Focusing on the nineteenth century, a transitional era in South Carolina history, Recovering the Piedmont Past explores a range of topics from upcountry tourism to African American religion to educational institutions to evolution controversies, illuminating the multi-hued characteristics and conventions of the area's residents. The volume adds deeper and richer colors to the picture of our state."—Amy Thompson McCandless, Dean, Graduate School and Professor of History, College of Charleston

"The subtitle to this book, 'Unexplored Moments in Nineteenth-century South Carolina History,' says it all. In this wonderful collection of essays, anyone interested in South Carolina history will discover aspects of our state's past that have seldom, if ever before, appeared in print. I hope that it will be a model for others in the years to come. Recovering the Piedmont Past is a welcome addition to my South Carolina bookshelf."—Walter Edgar, author of South Carolina: A History