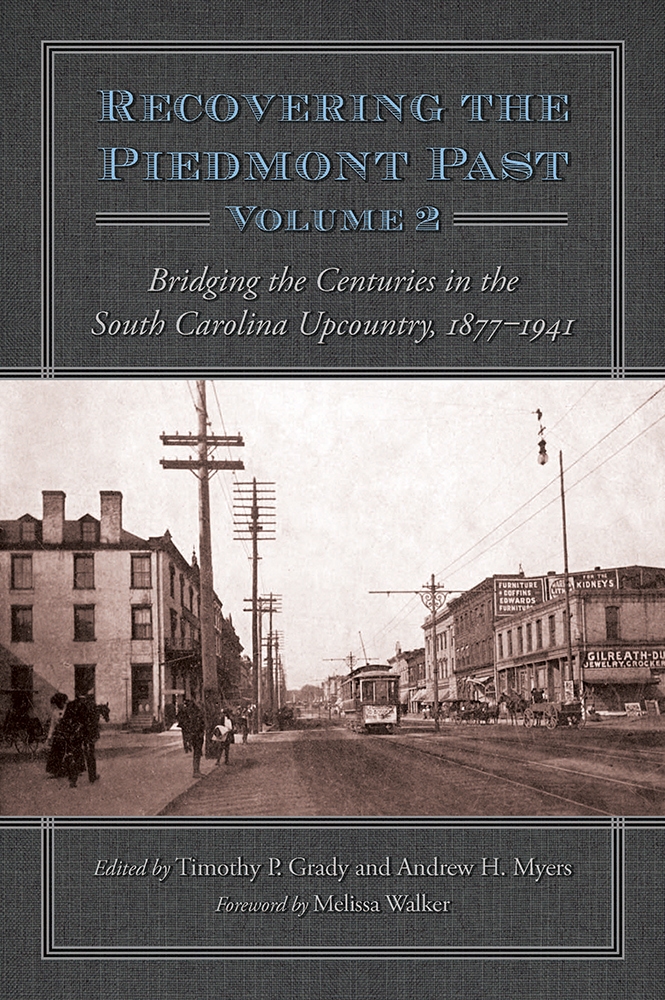 Recovering the Piedmont Past, Volume 2

Bridging the Centuries in the South Carolina Upcountry, 1877–1941

Continuing the theme of unexplored moments introduced in Recovering the Piedmont Past: Unexplored Moments in Nineteenth-Century Upcountry South Carolina History, Timothy P. Grady joins with Andrew H. Myers to edit this second anthology that uncovers the microhistory of this northwest region of the state. Topics include the influence of railroads on traveling circuses, tourist resorts and visits by Booker T. Washington during the rise of Jim Crow, pioneering efforts by progressives to identify the cause of pellagra disease, a debate over populism involving "Pitchfork Ben" Tillman, the acculturation of Greek immigrants, and the daily lives of Civilian Conservation Corps workers during the New Deal.

After years of being overshadowed by the coastal elite, upcountry South Carolinians began to play a vital role in modernizing the region and making it an integral part of the "New South." In a study of this shift in the balance of power, the contributors examine religious history, the economic boom and bust, popular recreational activities, and major trends that played out in small places. By providing details and nuance that illuminate the historical context of the New South and engaging with the upcountry from fresh angles, this second volume expresses a deep local interest while also speaking to broader political and social issues.


Timothy P. Grady, a professor of history at the University of South Carolina Upstate in Spartanburg, received his doctorate from the College of William and Mary. He is the author of Anglo-Spanish Rivalry in Colonial Southeast America, 1650–1720 and coeditor of Recovering the Piedmont Past: Unexplored Moments in Nineteenth-Century South Carolina History.

Andrew H. Myers, a professor of American studies at the University of South Carolina Upstate, received his doctorate from the University of Virginia. He is the author of Black, White, and Olive Drab: Racial Integration at Fort Jackson, South Carolina, and the Civil Rights Movement and coeditor of Historians in Service of a Better South: Essays in Honor of Paul Gaston.