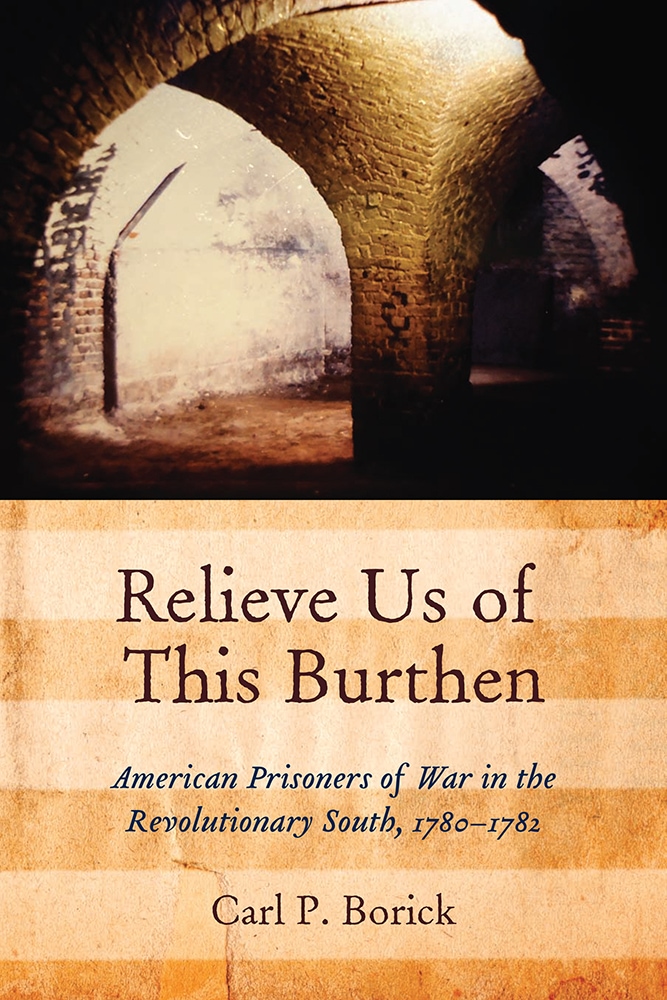 Relieve Us of This Burthen

American Prisoners of War in the Revolutionary South, 1780-1782

Relieve Us of This Burthen is the first book-length study of Continental soldiers, officers, and militiamen held as prisoners of war by the British in the South during the American Revolution. Carl P. Borick focuses his study on the period 1780-82, when British forces most actively campaigned in the South. He gives a detailed examination of the various hardships of imprisonment and efforts to assist and exchange prisoners while also chronicling events and military policies that affected prisoners during and after captivity.

As have prisoners of any war, captives in the Revolution suffered both physical and mental adversities during their imprisonments, and the impact often stayed with them after their release. Many escaped their captors or broke paroles to fight again. Others were exchanged; still others enlisted in British forces sent to the West Indies; and many died in prison. Because of the intense combat in South Carolina, more Americans were taken prisoner there than elsewhere across the Southern Department. Borick concentrates much of his narrative on Charleston and the lowcountry. Some six thousand Continentals, militia, and seamen were captured when Charleston surrendered in May 1780. This was the largest number of prisoners taken during a single operation. Occupied Charleston became the key prisoner depot for the British in the South.

Borick also explores British recruiting efforts among prisoners, particularly by the Duke of Cumberland's Regiment, raised from prisoners kept in Charleston for service in the West Indies against the French and Spanish. That regiment's experiences during and after the war were far different from those of other American soldiers in the Revolutionary War.

Relieve Us of This Burthen makes groundbreaking use of the Revolutionary War Pension and Bounty Land Warrant Application files, which have been underutilized with regard to understanding the history of prisoners of war. Borick's careful reading of the pension files reveals much about what men went through and how they endured in captivity.

"Borick provides a well-researched account of this key moment in the military history of the American Revolution when patriot fortunes seemed at their lowest point."—Southern Historian

"A welcome addition to the history of South Carolina and of the American Revolution."—Journal of Military History

"A handsome volume that is both well researched and accessible to a general readership. . . . A Gallant Defense is an insightful fusion of military, political, and social history."—Charleston (S.C.) Mercury

"The reader discerns clear prose, research and interpretations that are solid, a few myths are dispelled, and details of technology, battle plans and maneuvers are found in no other single place."—Charleston (S.C.) Post and Courier

"Borick's work is a most useful addition to the historiography of the Revolutionary War's southern campaigning. It was long overdue"—Journal of Southern History

"Carl P. Borick's Relieve Us of This Burthen fills a great gap in the history of the American Revolution. In this first book on the fate of American prisoners held by the British in the South Borick makes extensive use of primary sources to discuss subjects from the British prison ships in Charleston to the infamous execution of Isaac Hayne, and Borick tracks—all the way to Canada—some of the prisoners who had little choice but to enlist with the British. This book will be of great value to anyone interested in the American Revolution as it unfolded in the North or the South."—Philip Ranlet, author of The New York Loyalists and Enemies of the Bay Colony: Puritan Massachusetts and Its Foes