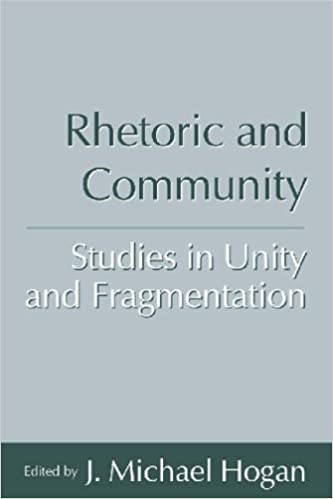 Studies in Unity and Fragmentation

In Rhetoric and Community, seventeen contributors explore an area of growing scholarly interest—how rhetoric defines, rallies, polarizes, and marginalizes specific communities. The contributors consider such contentious issues as how individuals are forged into communities, what sustains constructive communities, how communities become fragmented, and what leads to divisions of race, class, and gender, the rhetoric of hatred and violence, or failures of public discussion to resolve common problems.

The volume creates its own dialogue through seven case studies, each including an interpretive essay and response. The studies range from historical investigations of feminist and African American communities, to commentaries on military decision making and the rhetoric of war, to reflections on contemporary artistic and scientific communities. Unified by their common interest in discourse and community, the essays contribute new understandings of how rhetoric not only reflects but also shapes the character of specific communities and their place in society.


J. Michael Hogan is a professor of rhetoric at Pennsylvania State University and the author of The Panama Canal in American Politics, The Nuclear Freeze Campaign, and Woodrow Wilson's Western Tour. Hogan's work has been honored by the National Communication Association with the Winans-Wichelns Award and the Golden Anniversary Book Award.