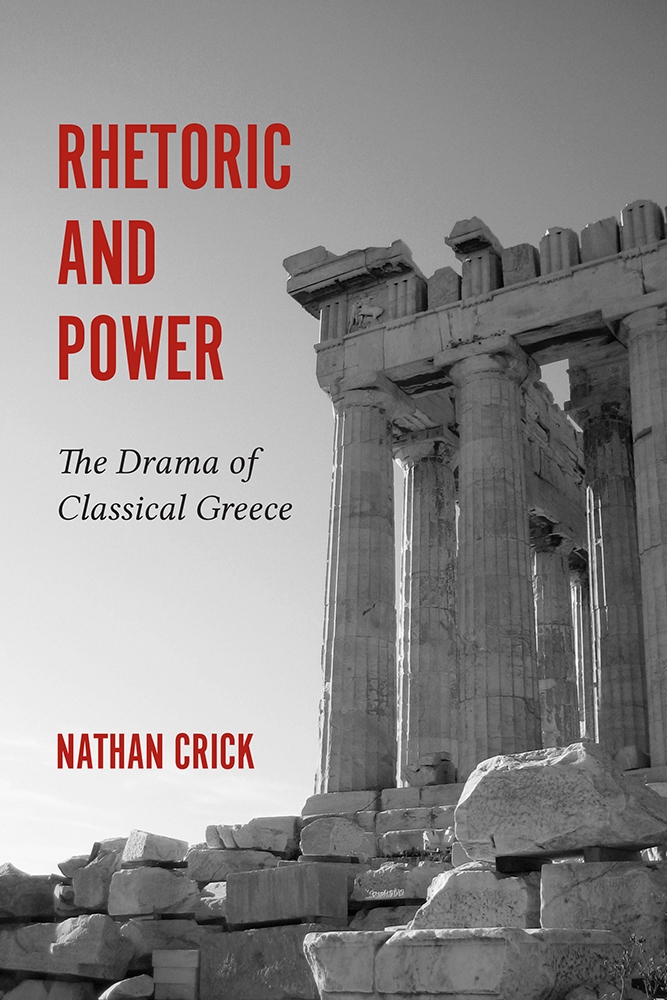 The Drama of Classical Greece

In Rhetoric and Power, Nathan Crick dramatizes the history of rhetoric by explaining its origin and development in classical Greece beginning the oral displays of Homeric eloquence in a time of kings, following its ascent to power during the age of Pericles and the Sophists, and ending with its transformation into a rational discipline with Aristotle in a time of literacy and empire. Crick advances the thesis that rhetoric is primarily a medium and artistry of power, but that the relationship between rhetoric and power at any point in time is a product of historical conditions, not the least of which is the development and availability of communication media.

Investigating major works by Homer, Heraclitus, Aeschylus, Protagoras, Gorgias, Thucydides, Aristophanes, Plato, Isocrates, and Aristotle, Rhetoric and Power tells the story of the rise and fall of classical Greece while simultaneously developing rhetorical theory from the close criticism of particular texts. As a form of rhetorical criticism, this volume offers challenging new readings to canonical works such as Aeschylus's Persians, Gorgias's Helen, Aristophanes's Birds, and Isocrates's Nicocles by reading them as reflections of the political culture of their time.

Through this theoretical inquiry, Crick uses these criticisms to articulate and define a plurality of rhetorical genres and concepts, such as heroic eloquence, tragicomedy, representative publicity, ideology, and the public sphere, and their relationships to different structures and ethics of power, such as monarchy, democracy, aristocracy, and empire. Rhetoric and Power thus provides a foundation for rhetorical history, criticism, and theory that draws on contemporary research to prove again the incredible richness of the classical tradition for contemporary rhetorical scholarship and practice.


Nathan Crick is an associate professor of communication at Texas A&M University and author of Democracy and Rhetoric: John Dewey on the Arts of Becoming (University of South Carolina Press) and Rhetorical Public Speaking.

"A refulgent performance by a textual conductor in command of a demanding repertoire. Its three movements (necessity-techne, actuality-possibility, tragedy-comedy) will satisfy many an intellectual longing in discriminating readers of all stripes. Hands down, the most important book on rhetoric in the early morning of the twenty-first century."—John Poulakos, University of Pittsburgh

"Both drama and epic, this remarkable book traces the continually shifting conceptions of rhetoric and power from Homer to Aristotle. This broad sweep is balanced by the clarity and nuance of each chapter, and one sure result is that it will be a superb text for classroom instruction. We still have much to learn from antiquity, and Crick exemplifies how the study of classical rhetoric can be a source of understanding for a tragic world."—Robert Hariman, Northwestern University

"Rhetoric and Power is likely to have strong interdisciplinary appeal, offering valuable insights relevant to rhetoric, philosophy, political science, ancient history, ethics, and civics education... For readers seeking better understanding of the relationship between rhetoric and power, who agree with Crick's assertion that "we do not have the luxury to simply sail effortlessly on the currents of power without understanding the nature of power and its relevance to the way we think, speak, act, and persuade" Rhetoric and Power is worth adding to the reading list."—Rhetoric & Public Affairs