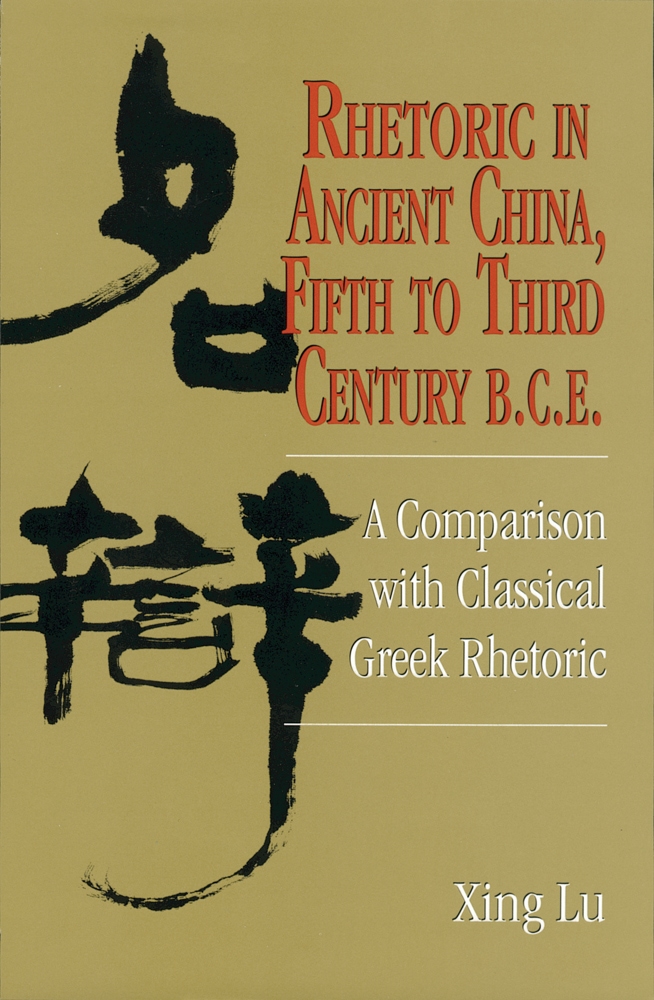 A Comparison With Classical Greek Rhetoric

Xing Lu examines language, art, persuasion, and argumentation in ancient China and offers a detailed and authentic account of ancient Chinese rhetorical theories and practices within the society's philosophical, political, cultural, and linguistic contexts. She focuses on the works of five schools of thought and ten well-known Chinese thinkers from Confucius to Han Feizi to the the Later Mohists. Lu identifies seven key Chinese terms pertaining to speech, language, persuasion, and argumentation as they appeared in these original texts, selecting ming bian as the linchpin for the Chinese conceptual term of rhetorical studies.

Lu compares Chinese rhetorical perspectives with those of the ancient Greeks, illustrating that the Greeks and the Chinese shared a view of rhetoric as an ethical enterprise and of speech as a rational and psychological activity. The two traditions differed, however, in their rhetorical education, sense of rationality, perceptions of the role of language, approach to the treatment and study of rhetoric, and expression of emotions. Lu also links ancient Chinese rhetorical perspectives with contemporary Chinese interpersonal and political communication behavior and offers suggestions for a multicultural rhetoric that recognizes both culturally specific and transcultural elements of human communication.

Xing Lu is a professor in the College of Communication at DePaul University. A native of China, Lu received her undergraduate degree in China, her M.A. in Australia, and her Ph.D. from the University of Oregon. She is also the author of Rhetoric of the Chinese Cultural Revolution.

"The author's three main aims are: first, to open up the Eurocentric canon by introducing the Chinese domain of rhetorical awareness and practices; secondly, to analyze this implicit Chinese rhetorical tradition on the basis of various uses of and statements about language; and thirdly, to initiate a cross-cultural study of rhetoric through a comparison with Western rhetorical practices."—Journal of Asian Studies

"A useful introduction to a wealth of Chinese material of potential interest over a very broad literary, historical, and philosophical range. . . . Many Classicist readers will profit from exposure to this rich material."—Bryn Mawr Classical Review

"While she skillfully explicates ancient Chinese language and persuasion theory in a way that respects its cultural specificity, Lu also manages to compare it fruitfully to classical Greek rhetorical theory in a way that illuminates both while obscuring neither. Her book is a model of careful historical reconstruction."—Edward Schiappa