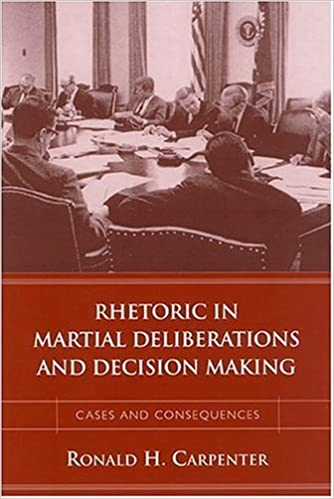 Case studies on the role of rhetoric in making military decisions

In this study of the discourse involved in martial deliberations, Ronald H. Carpenter examines the rhetoric employed by naval and military commanders as they recommend specific tactics and strategies to peers as well as presidents. Drawing on ideas of rhetorical thinking from Aristotle to Kenneth Burke, Carpenter identifies two concepts of particular importance to the military decision-making process: prudence and the representative anecdote. Carpenter suggests that attention to these two concepts enables an understanding of how military commanders settle on a course of action and persuade others to support them.

Carpenter turns for illustration and insight to key case studies in which military commanders centered their rhetoric on representative anecdotes involving earlier campaigns. He shows Douglas MacArthur persuading the Joint Chiefs of Staff to act on his plan for the Inchon attack; Maxwell Taylor reacting to Robert Kennedy's invocation of Pearl Harbor in deliberations during the Cuban Missile Crisis; Japanese and American commanders deliberating during the battles of Pearl Harbor and Midway; and Orde Wingate, Bull Halsey, and MacArthur debating strategy in the Pacific. In all such deliberations the primary focus is the prudent course.

Carpenter suggests that the trend in contemporary society from authoritarianism toward management by persuasion, explanation, and expertise similarly permeates the military. He contends that rhetorical proficiency in martial deliberations can be as important for a military leader as tactical and strategic expertise.


Ronald H. Carpenter earned his Ph.D. in communication arts from the University of Wisconsin. A professor of English at the University of Florida, Carpenter is the author of The Eloquence of Frederick Jackson Turner, Father Charles E. Coughlin: Surrogate Spokesman for the Disaffected, and History as Rhetoric: Style, Narrative, and Persuasion and coauthor of Douglas MacArthur: Warrior as Wordsmith. The recipient of numerous awards, including a National Communication Association Golden Anniversary Monograph Prize for Outstanding Scholarship and the 2004 Douglas Ehninger Rhetorical Scholar Award and a Southern Communication Association Teacher-Scholar Award, he is a consultant to professional and governmental groups. Carpenter lives in Gainesville.

"Ronald H. Carpenter is simply our finest explicator of the rhetoric of martial engagements. In this book he extends and deepens our understanding of how, why, and when nations go to war. His scholarship is of great and singular importance, not just to our discipline but to those who bear the responsibility of practicing such rhetoric and responding to it."—Michael M. Osborn, Professor Emeritus, Department of Communication, University of Memphis

"Ronald H. Carpenter will give readers a new way of looking at military decision making. He allows the major players—including Douglas MacArthur, Winston Churchill, and many others—to speak for themselves, drawing on their correspondence, speeches, memoirs, and oral histories. For the armed forces, certain unfamiliar concepts such as Aristotelian agathon, 'gate-keeping,' 'communication mosaic,' 'orality,' and 'para-message persona' may merit careful consideration by those who participate in martial decision-making or maintain vital interests in its outcomes; it is well worth the effort."—Edwin Howard Simmons, Brigadier General, U.S. Marine Corps (Retired), Director Emeritus, Marine Corps History, and author of The United States Marines: A History and Dog Company Six

"This preeminent rhetorical scholar has done it again. In this fine volume Ronald H. Carpenter combines exhaustive research, extraordinary detail, and often eloquent explication to explore that most compelling of rhetorical exigencies: the conduct of war. The resulting insights expand our understanding not only of military decision-making but also of the power of rhetoric."—Kathleen J. Turner, Department of Communication Studies, Davidson College, and author of Lyndon Johnson's Dual War: Vietnam and the Press