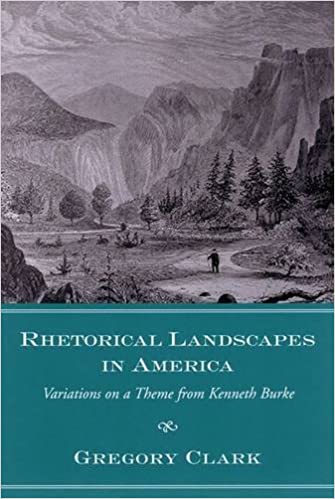 Variations on a Theme from Kenneth Burke

At the same time a reading of Kenneth Burke and of tourist landscapes in America, Gregory Clark's new study explores the rhetorical power connected with American tourism. Looking specifically at a time when citizens of the United States first took to rail and then highway to become sightseers in their own country, Clark traces the rhetorical function of a wide-ranging set of tourist experiences. He explores how the symbolic experiences Americans share as tourists have helped residents of a vast and diverse nation adopt a national identity. In doing so he suggests that the rhetorical power of a national culture is wielded not only by public discourse but also by public experiences.

Clark examines places in the American landscape that have facilitated such experiences, including New York City, Shaker villages, Yellowstone National Park, the Lincoln Highway, San Francisco's 1915 Panama-Pacific International Exposition, and the Grand Canyon. He examines the rhetorical power of these sites to transform private individuals into public citizens, and he evaluates a national culture that teaches Americans to experience certain places as potent symbols of national community.

Invoking Burke's concept of "identification" to explain such rhetorical encounters, Clark considers Burke's lifelong study of symbols—linguistic and otherwise—and their place in the construction and transformation of individual identity. Clark turns to Burke's work to expand our awareness of the rhetorical resources that lead individuals within a community to adopt a collective identity, and he considers the implications of nineteenth- and twentieth-century tourism for both visual rhetoric and the rhetoric of display.

Gregory Clark studies rhetoric and the variety of ways that it operates in American culture. He is the author of Dialogue, Dialectic, and Conversation: A Social Perspective on the Function of Writing and coeditor of Oratorical Culture in Nineteenth-Century America: Transformations in the Theory and Practice of Rhetoric. Clark is a professor of English at Brigham Young University and is editor of Rhetoric Society Quarterly. He lives in Provo, Utah.

"This is a book that should be read by everyone who cares about how we obtain our ideas and how we are led to identify with this or that community. Following Kenneth Burke's brilliantly expanded definition of rhetoric as including all forms of 'identification,' Gregory Clark now demonstrates the ways in which the minds of even the most 'thoughtless' tourists are reshaped by what they see. The rhetoric of landscapes has hardly ever been mentioned before, and Clark's demonstration of how it works may well change all careful readers' (and tourists') notions of how their minds have been shaped."—Wayne Booth, author of The Rhetoric of Fiction and coauthor of The Craft of Research

"Rhetorical Landscapes in America is an extraordinary book. Imaginatively expanding on Kenneth Burke's rhetoric of identification, Gregory Clark skillfully guides us through a rich exploration of the discursive and nondiscursive experiences of civic tourism. In so doing, he persuasively demonstrates how those experiences of symbolic landscape significantly shape our individual and collective identities as Americans. At this moment in our national history, this book is a tour not to be missed."—Steven Mailloux, University of California, Irvine, Chancellor's Professor of Rhetoric and author of Reception Histories: Rhetoric, Pragmatism, and American Cultural Politics