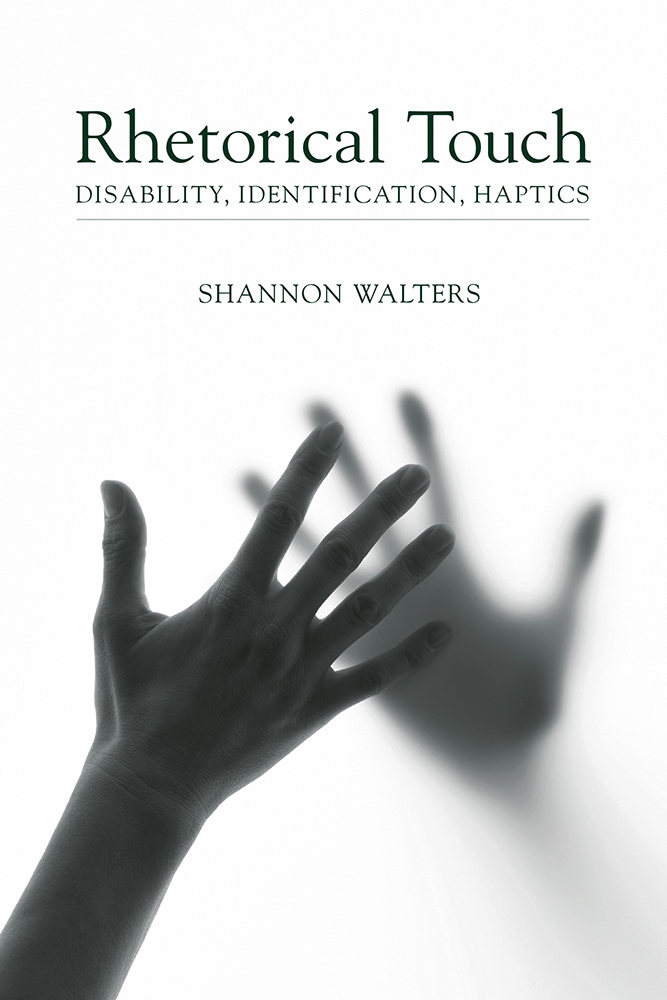 Rhetorical Touch argues for an understanding of touch as a rhetorical art by approaching the sense of touch through the kinds of bodies and minds that rhetorical history and theory have tended to exclude. In resistance to a rhetorical tradition focused on shaping able bodies and neurotypical minds, Shannon Walters explores how people with various disabilities—psychological, cognitive, and physical—employ touch to establish themselves as communicators and to connect with disabled and nondisabled audiences. In doing so, she argues for a theory of rhetoric that understands and values touch as rhetorical.

Essential to her argument is a redefinition of key concepts and terms—the rhetorical situation, rhetorical identification, and the appeals of ethos (character), pathos (emotion), and logos (logic or message). By connecting Empedoclean and sophistic theories to Aristotelian rhetoric and Burkean approaches, Walters's methods mobilize a wide range of key figures in rhetorical history and theory in response to the context of disability. Using Empedocles' tactile approach to logos, Walters shows how the iterative writing processes of people with psychological disabilities shape crucial spaces for identification based on touch in online and real life spaces. Mobilizing the touch-based properties of the rhetorical practice of mētis, Walters demonstrates how rhetors with autism approach the crafting of ethos in generative and embodied ways. Rereading the rhetorical practice of kairos in relation to the proximity between bodies, Walters demonstrates how writers with physical disabilities move beyond approaches of pathos based on pity and inspiration. The volume also includes a classroom-based exploration of the discourses and assumptions regarding bodies in relation to haptic, or touch-based, technologies.

Because the sense of touch is the most persistent of the senses, Walters argues that in contexts of disability and in situations in which people with and without disabilities interact, touch can be a particularly vital instrument for creating meaning, connection, and partial identification. She contends that a rhetoric thus reshaped stretches contemporary rhetoric and composition studies to respond to the contributions of disabled rhetors and transforms the traditional rhetorical appeals and canons. Ultimately, Walters argues, a rhetoric of touch allows for a richer understanding of the communication processes of a wide range of rhetors who use embodied strategies.


Shannon Walters is an assistant professor of English at Temple University, where she teaches courses in rhetoric and composition, disability studies, and women's studies. Her work has appeared in JAC: A Journal of Rhetoric, Culture & Politics; Technical Communication Quarterly; Feminist Media Studies; Disability Studies Quarterly, Journal of Literary and Cultural Disability Studies, and PMLA.

"Rhetorical Touch: Disability, Identification, Haptics offers a fresh and convincing argument that interdependence, a key concept in disability studies, is an actual, physical mediating space between bodies where inner and outer meet. Supported by classical and contemporary examples, Walters shows how touch, occurring at the intersection of bodies, is rhetorical, thereby enlarging a key concept in disability studies—interdependence—while highlighting the importance of haptics for communication and learning."—Cynthia Lewiecki-Wilson, professor emerita of English, Disability Studies and Women, Gender, and Sexuality Studies, Miami University

"In this excellent book, Shannon Walters reveals how, given much more recent attention to disability studies, animal studies, and the haptics of new technologies, touch can and should be at the very center of rhetorical study today. This book offers an ambitious, radical, and finally quite successful reinvigoration of the entirety of rhetorical history, resituating non-normative bodies at the center of inquiry, and touch at the center of communication, reaching out to blur nebulous boundary lines between self and other, human and animal, body and technology."—Jay Dolmage, associate professor of English, University of Waterloo, and editor, Canadian Journal of Disability Studies

"This important book takes up two critical strands of rhetoric/composition—touch and disability. While employing new theories to illuminate the importance of each strand, Rhetorical Touch also deepens our understanding of long-standing and key themes, including identification and teacher-research. Walters's use of classical and modern rhetorical theory gives this book complexity and heft. It is the culmination of many years of deep study, written in clear, engaging prose."—Margaret Price, associate professor of English, Spelman College