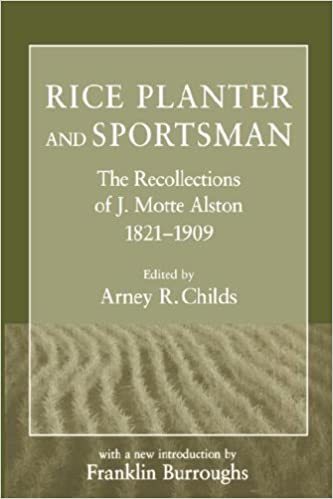 Reprinted here for the first time in more than forty years is Rice Planter and Sportsman: The Recollections of J. Motte Alston, 1821-1909.

This lively memoir offers a candid look into the daily life of a Low Country South Carolina family, as well as commentary and opinion about such matters as rice cultivation, slavery, and the sporting life.

J. Motte Alston's memoirs, originally numbering more than five hundred pages, were never intended for official publication. Alston wrote for his grandson, who was fascinated by his family's personal history and how it fit into the larger context of South Carolina and the southern region.

For the Alstons, family was more than a domestic affair. It was also a powerful economic consortium. The buying or selling of land and the building or leasing of houses; the management of each detail of the rice crop; the decision to marry, to have children, or to summer in the mountains—all were more than private or economic decisions. Alston included such details to help his grandson navigate the often tense waters of family affairs.

Rice Planter and Sportsman also offers an entertaining look at the sport of the day. Much of the land on which Alston hunted with such success is now in privately owned game preserves, running from the rivers to the coast. Alston also included many details on the abundance of fish and game throughout the South Carolina Low Country and Blue Ridge Mountains.

Franklin Burroughs' evocative and warm personal memoir conveys the story of the Alstons and places this memoir firmly in its broader historical context.

Arney R. Childs (1891–1987) was a member of the history department and dean of women at the University of South Carolina.