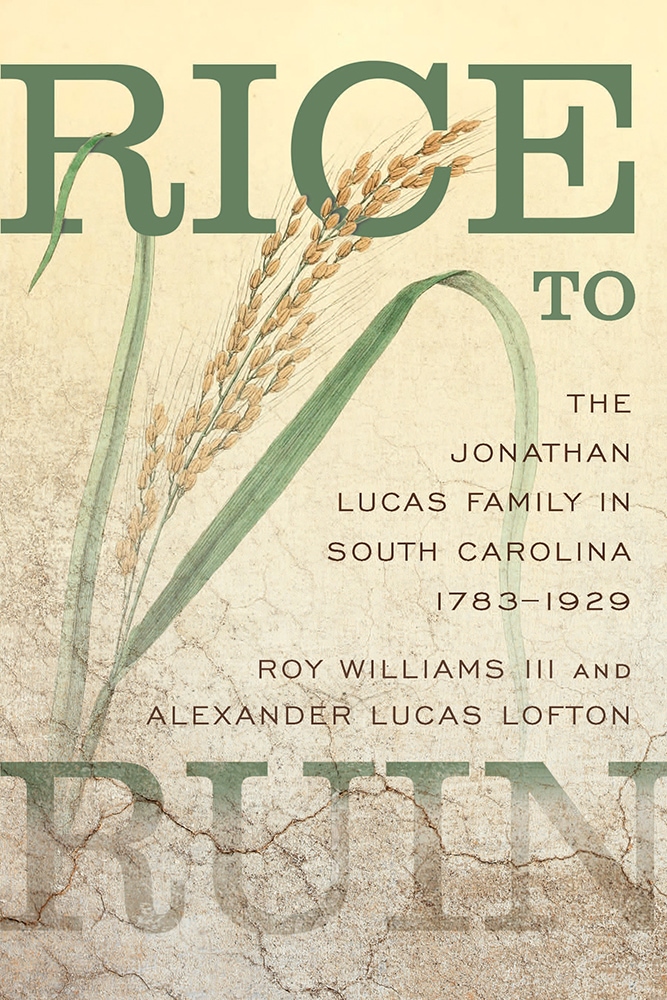 In the 1780s Jonathan Lucas, on a journey from his native England, shipwrecked near the Santee Delta of South Carolina, about forty miles north of Charleston. Lucas, the son of English mill owners and builders, found himself, fortuitously, near vast acres of swamp and marshland devoted to rice cultivation. When the labor-intensive milling process could not keep pace with high crop yields, Lucas was asked by planters to build a machine to speed the process. In 1787 he introduced the first highly successful water-pounding rice mill—creating the foundation of an international rice mill dynasty. In Rice to Ruin, Roy Williams III and Alexander Lucas Lofton recount the saga of the precipitous rise and ultimate fall of that empire.

Lucas's invention did for rice, South Carolina's first great agricultural staple, what Eli Whitney did for cotton with his cotton gin. With his sons Jonathan Lucas II and William Lucas, Lucas built rice mills throughout the lowcountry. Eventually the rice kingdom extended to India, Egypt, and Europe after the younger Jonathan Lucas moved to London to be at the center of the international rice trade.

Their lives were grand until the American Civil War and its aftermath. The end of slave labor changed the family's fortunes. The capital tied up in slaves evaporated; the plantations and town houses had to be sold off one by one; and the rice fields once described as "the gold mines of South Carolina" often failed or were no longer planted. Disease and debt took its toll on the Lucas clan, and, in the decades that followed, efforts to regain the lost fortune proved futile. In the end the once-glorious Carolina gold rice fields that had brought riches left the family in ruin.

"Rice to Ruin: The Jonathan Lucas Family, 1783-1929 is a family epic in the genre of Robert Myers' Children of Pride. Jonathan Lucas I did for rice culture what contemporary Eli Whitney did for cotton. Roy Williams III and Alexander Lucas Lofton skillfully weave narrative with extracts from letters in recounting the lives of generations of the Lucas and related families."—Allen Stokes, South Caroliniana Library, University of South Carolina

"Authors Roy Williams III and Alexander Lucas Lofton have given us a meticulously researched account of the Lucas family, revealing how integral its members were to South Carolina history."—The Post & Courier (Charleston, SC)