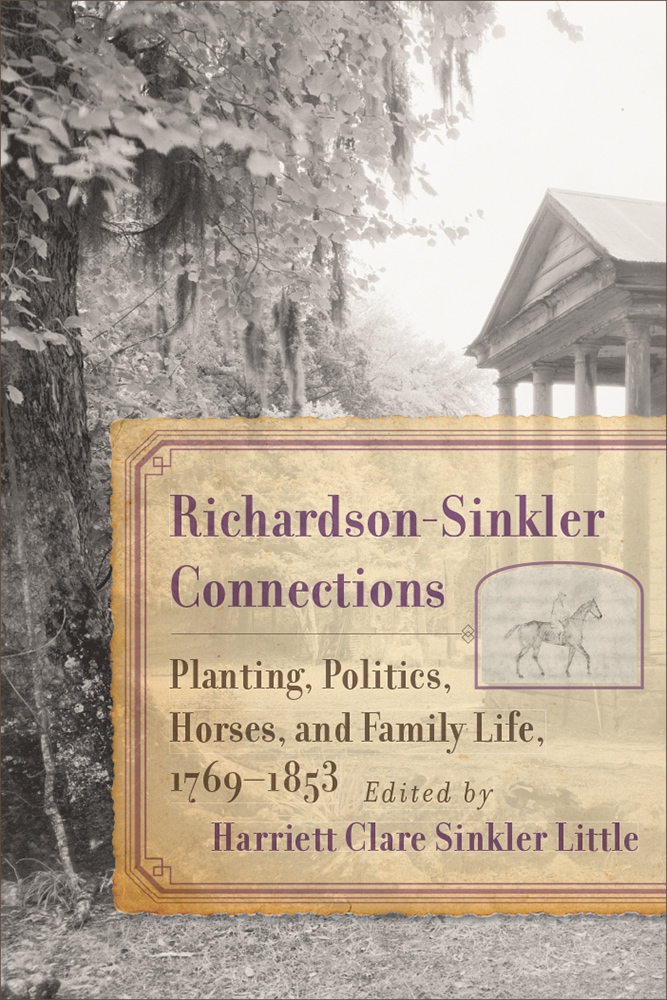 Offering a richly textured picture of early national South Carolina, Richardson-Sinkler Connections includes more than 150 letters and documents left by the prominent Richardson and Sinkler families, who lived in the Santee region between Charleston and Columbia. Prosperous landowners related by both blood and marriage, the families made their fortunes as planters of indigo, rice, and cotton.

The Sinkler family established homes south of the Santee River starting around 1700, and Richard Richardson arrived from Virginia about 1730. The second James Sinkler died in 1800, leaving four children, only one of whom had completed his education. Thirteen years old when his father died, the second son, William Sinkler, was mentored by his older first cousin/brother-in-law, state representative and later governor James B. Richardson, who closely followed the boy's progress as he pursued his studies in the North. William would go on to build Eutaw plantation in what is now Orangeburg County and, like his cousin James, pursue a passionate interest in horse breeding and racing, even building a racetrack on his property. In addition to revealing details about matters of politics, farming, education, travel, and racing, the letters also describe the difficulties of visiting across the Santee River, in the Sandhills where the Richardsons lived. The linchpin of the two families was James Sinkler's widow, Margaret, who was adored by her niece/stepdaughter, Ann, as well as by the Richardson nephews and many others. Her letters, and Ann's, open a fascinating window into women's lives of the era.

Thorough annotations with genealogical notes and charts trace the complicated relationships between the Sinklers and Richardsons, as well as among other prominent families of the region and state. The book includes more than forty illustrations, including portraits, sketches, photographs of plantations and other sites, plats, and maps.


Harriet Clare Sinkler Little spent her early years at Eutaw plantation, the sixth—and last—generation to do so before it was covered by Lake Marion. She holds degrees from the University of South Carolina and the Citadel Graduate School and pursued multiple careers. An ardent traveler, she has over the past twenty years focused on genealogy and historical research, writing articles for journals, magazines, and newspapers.

"Culling through numerous family papers–each a vital primary document–Harriet C.S. Little provides a strong voice for a remarkable South Carolina planter family. Their correspondences, more than a collection of simple letters, exhibit poignant family discussions that particularize not only important aspects of their times, but also the workaday ordeals within their daily lives."—J. Grahame Long, Chief Curator, Charleston Museum