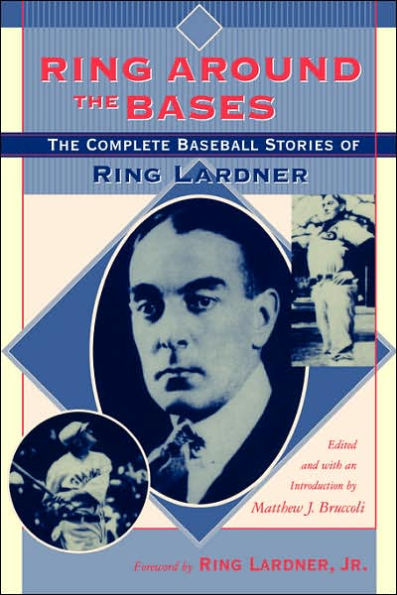 Ring Around the Bases

More than any other writer in the twentieth century, Ring Lardner was identified with baseball. His years as a newspaper reporter in Chicago covering the Cubs and White Sox gave him inside knowledge of the sport and how it reflected the American experience. Lardner's baseball short stories remain the core of his career and the basis of his enduring reputation.

With his unerring eye for detail and his sense of the absurd, Lardner ranged over the entire game. He probed not only the nature of the game but also the lives of the men who played it. His famous portraits, such as those in "Alibi Ike" and "My Roomy," express his complex responses to baseball and the people associated with it. Historically accurate and richly textured, Ring Around the Bases reveals the master at the height of his craft and celebrates the American pastime. The collection is the ultimate lineup in baseball fiction.

Ring Around the Bases was originally published by Charles Scribner's Sons in 1992 in cloth. This new paperback edition includes an additional uncollected short story. Located after the publication of the cloth edition, "The Courtship of T. Dorgan" truly makes this volume of thirty-four stories the complete Lardner baseball collection.


Ringgold Wilmer Lardner (1885–1933) was a native of Niles, Michigan. Like most American writers of his generation, Lardner served his literary apprenticeship on newspapers. In 1905 he joined the South Bend Times in Indiana and reported on social and courthouse events, as well as serving as the drama critic and sports editor. In 1907 Lardner moved to Chicago, where he covered the Cubs and the White Sox for several newspapers including the Tribune, where in 1913 he took over the widely acclaimed column "In the Wake of the News." The following year he published his first work of magazine fiction—a busher story—in the Saturday Evening Post.

Matthew J. Bruccoli, the Emily Brown Jefferies Professor of English at the University of South Carolina, was the leading authority on the House of Scribner and its authors. He is the author of Some Sort of Epic Grandeur: The Life of F. Scott Fitzgerald and the editorial director of the Dictionary of Literary Biography.

"Ring Around the Bases: The Complete Baseball Stories of Ring Lardner is the baseball literary event of the year."—USA Today

"Break out the peanuts and Cracker Jacks, this collection provides the opportunity for a new generation of baseball aficionados to come home to Lardner's wonderful stories."—Booklist

"Read Lardner's baseball tales, and you'll be thrown into a world where, to use a cliché that has been hurled recklessly in recent years, the game truly becomes a metaphor for life."—People

"Lardner, who never wrote novels and never gained stature as a 'serious writer,' had an eye and an ear for the baseball player and his language, and that microcosm of American society has never been so clearly depicted. He knew their foibles, but also their warmth, and shows both, unlike so many of today's biographers and essayists, who either lionize or derogate. As a baseball writer, Ring Lardner still stands alone."—St. Louis Post-Dispatch