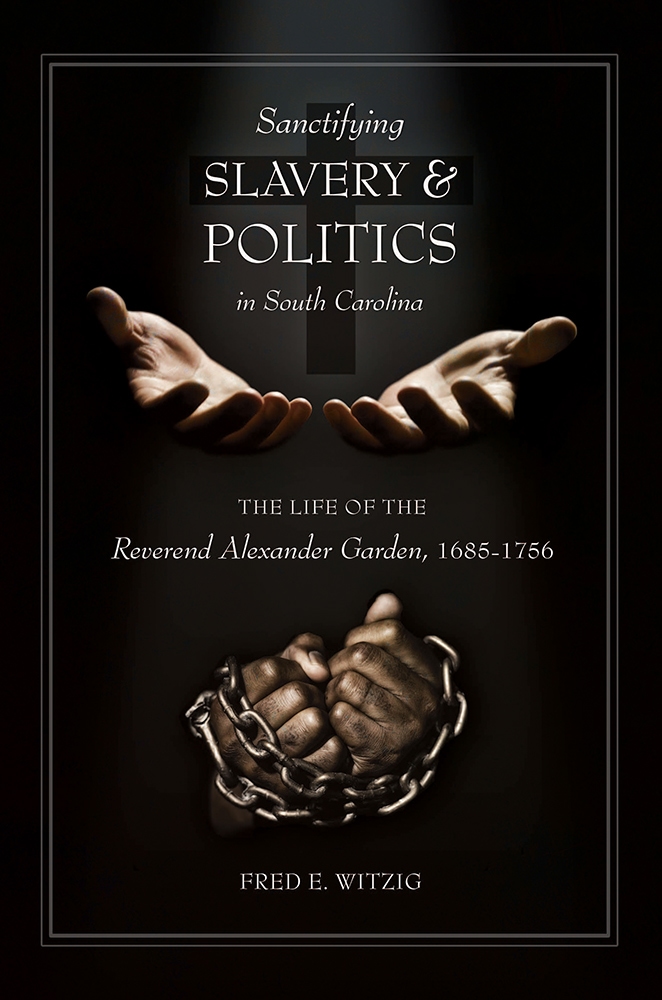 When Alexander Garden, a Scottish minister of the Church of England, arrived in South Carolina in 1720, he found a colony smoldering from the devastation of the Yamasee War and still suffering from economic upheaval, political factionalism, and rampant disease. It was also a colony turning enthusiastically toward plantation agriculture, made possible by African slave labor. In Sanctifying Slavery and Politics in South Carolina, the first published biography of Garden, Fred E. Witzig paints a vivid portrait of the religious leader and the South Carolina colony he helped shape.

Shortly after his arrival, Garden, a representative of the bishop of London, became the rector of St. Philip's Church in Charleston, the first Anglican parish in the colony. The ambitious clergyman quickly married into a Charleston slave-trading family and allied himself with the political and social elite. From the pulpit Garden reinforced the social norms and economic demands of the southern planters and merchants, and he disciplined recalcitrant missionaries who dared challenge the prevailing social order. As a way of defending the morality of southern slaveholders, he found himself having to establish the first large-scale school for slaves in Charles Town in the 1740s.

Garden also led a spirited—and largely successful—resistance to the Great Awakening evangelical movement championed by the revivalist minister George Whitefield, whose message of personal salvation and a more democratic Christianity was anathema to the social fabric of the slaveholding South, which continually feared a slave rebellion. As a minister Garden helped make slavery morally defensible in the eyes of his peers, giving the appearance that the spiritual obligations of his slaveholding and slave-trading friends were met as they all became extraordinarily wealthy.

Witzig's lively cultural history—bolstered by numerous primary sources, maps, and illustrations—helps illuminate both the roots of the Old South and the Church of England's role in sanctifying slavery in South Carolina.


Fred E. Witzig is an associate professor of history at Monmouth College in western Illinois and the cofounder of the Midwest Journal of Undergraduate Research. His article "Beyond Expectation: How Charles Town's 'Pious and Well-Disposed Christians' Changed Their Minds about Slave Education during the Great Awakening" won the 2014 Clark-Weir Award for the best article published in the South Carolina Historical Magazine.

"A fascinating biography of Alexander Garden, who made the Church of England a power to be reckoned with in colonial South Carolina by marrying the Church to the elite's interests. Ornery, vindictive, political, and social, Garden dutifully guided the Church through decades of challenges from within and without. Lively, learned, and well-written, this is the best book yet on religion in colonial South Carolina."—Alan Gallay, Texas Christian University

"Sanctifying Slavery succeeds admirably in bringing Garden's unique career to light. The work is thoroughly grounded in primary sources and draws effectively from secondary scholarship far beyond the boundaries of religious history, including slave studies, economic history, and ethnohistory. This well-written and persuasive analysis deserves a wide audience."—Journal of American History