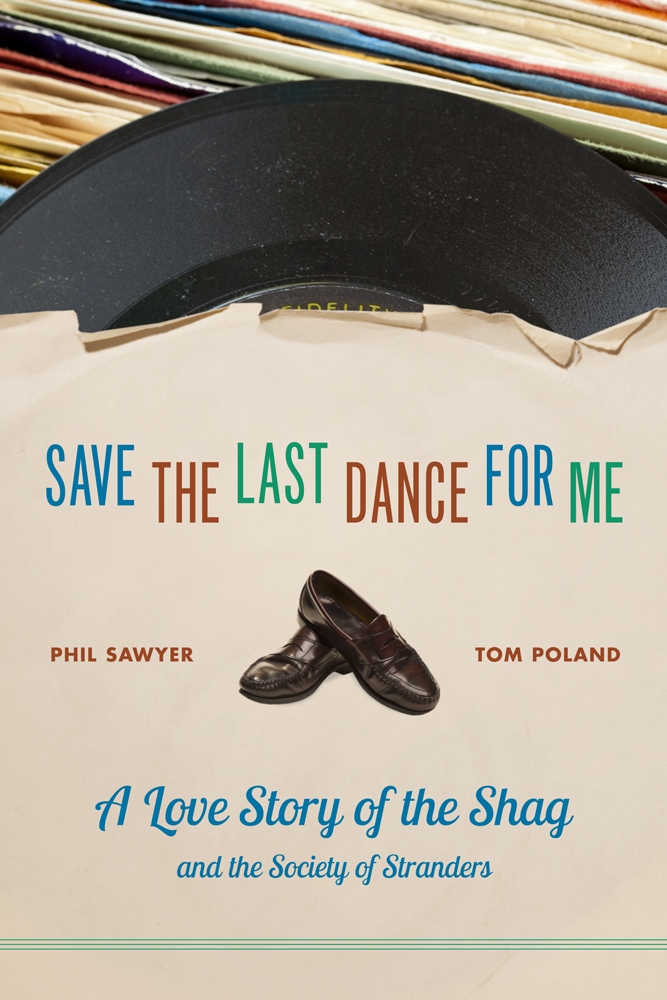 Save the Last Dance for Me

A Love Story of the Shag and the Society of Stranders

The shag, the official state dance of North and South Carolina, originated in the 1930s. The dance quickly spread throughout the South, where it became a legend in many beach regions. Save the Last Dance for Me is the story of the shag and the development of the Society of Stranders, an organization devoted to the dance and its culture.

In Save the Last Dance for Me, Phil Sawyer and Tom Poland retell the story of the legendary dance and its iconic presence at Ocean Drive, Myrtle Beach, and other South Carolina beaches. While contributing memories of shagging on Ocean Drive, Sawyer and Poland also discuss the actual dance steps that make up the shag. With the retelling of the shag story comes the unique story of the Society of Stranders. Formed in 1980 after a Red Sea Balsam bottle containing an SOS note washed ashore as a practical joke, what resulted was increased national publicity and five thousand "stranders" flocking to Ocean Drive Beach to show their support for the shag culture. The Society of Stranders, or SOS, and the Association of Carolina Shag Clubs together now consist of more than fifteen thousand members. The shag's past, present, and future are described here with archival and contemporary photographs.

The shag has become an important part of coastal culture for thousands, particularly in North Myrtle Beach, a community that has embraced the legacy of this dance. Save the Last Dance for Me tells the story of cultural change, including the separation and integration of races, and chronicles how rhythm and blues, Motown, and beach music evolved to create a social phenomenon that is still popular today.


Phil Sawyer earned his undergraduate, graduate, and doctorate degrees from the University of South Carolina. A native of Salley, South Carolina, Sawyer is a U.S. Army veteran and retired university professor. An integral part of the shag movement, Sawyer serves as president emeritus of the Society of Stranders and was honored with its Lifetime Achievement award in 2011.

"The S.O.S. was a product of serendipity, good luck, and shoot-from-the-hip planning. Intended to be a one-time reunion for a few hundred former Ocean Drive Beach teenage diehards of the 40s and 50s, the beach party is still going on after some thirty-two years of revelry. It has been attended by many tens of thousands! Tom Poland and Phil Sawyer have captured in Save the Last Dance for Me some of the joie de vivre, fun and hijinks that went into making the South's largest adult party such a roaring success!"—Gene Laughter, S.O.S. Godfather

"Dr. Phil Sawyer is one of a kind, and in the small genre of Carolina shag history books, Save the Last Dance for Me is also one of a kind. You are about to learn that, decades ago, a radical merger of cultures and customs created a social dance more graceful and beautiful than the sum of its partners. By the time you finish, you will know that, without Phil Sawyer's love for the dance and his loyalty to it, the Society of Stranders would have drifted into oblivion. The 15,000 SOS dancers, young and old, who continue to migrate to the beach three times every year owe Phil big time.——"—Richard S. Durlach, dance instructor, University of South Carolina Department of Theatre and Dance

"A must read for all who have, at one time or another, been touched by the shag and the music that made it possible. Save the Last Dance for Me presents an excellent history of our dance, the shag, emphasizing how it started, the people, the places, the music, the good times and the bad, and the growth and preservation. If you love the shag, you will love this book."—Charlie Womble and Jackie McGee, nine-time National Shag Champions

"When the novelty bottle washed ashore at Ocean Drive in 1980 announcing the inaugural Society of Stranders, the beach again became a second home for dancing and music enthusiasts. My friend Phil Sawyer shares that and other shag stories beautifully. Thank you, Phil, for your rare imagination, making Ocean Drive, South Carolina, the shag–dancing Mecca of the world."—John J. "Bubber" Snow, South Carolina House of Representatives, 24 years