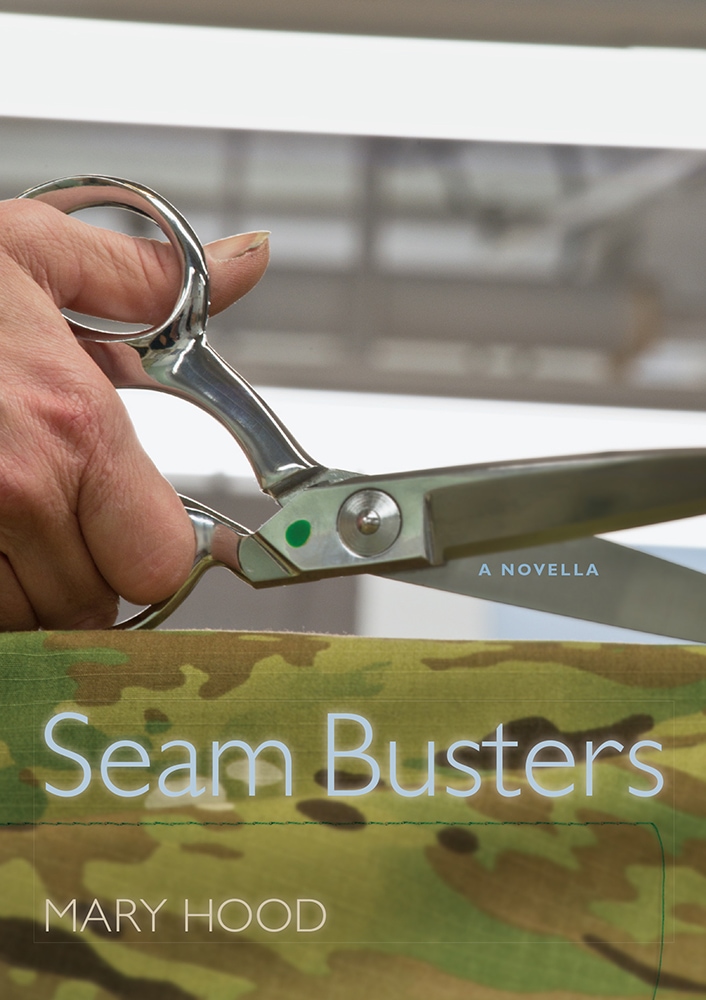 Mary Hood's novella Seam Busters explores the connections we make to one another, from the simplest of acts to those moments that define life and death. When Irene Morgan returns to Frazier Fabrics, a family-owned cotton mill in the hardscrabble heart of Ready, Georgia, she joins an eclectic group of women workers sharing their interwoven lives inside and outside the factory. Under constant surveillance and beholden to production quotas and endless protocols presented under the auspices of "American Pride," the women sew state-of-the-art camouflage for U.S. troops fighting in Afghanistan, one of whom is Irene's son.

As Irene toils under the stress of the learning curve and production goals in her first ninety days, she comes to embrace the camaraderie of her peers, some of whom play on the mill's bowling team, the Seam Busters. She comes to know Coquita, a shaky veteran returned from three tours in the Middle East; Kit, an angel-haired rule breaker unlucky in love; the stoic Hmong woman Sue Nag; the beaten but not yet defeated K'shaundra; and Jacky, a well-intentioned fool determined to be heard. In time Irene comes to value her bonds with this motley crew as much as with her husband, Deke, on their small farm and with her far-flung children and grandchildren. When the shadow of death travels from the war front to the home front, Hood deftly braids the threads of these disparate lives and stories into a lifeline for Irene, as her entire community gathers together in an impassioned act of mourning ultimately giving rise to mercy.

Mary Hood is the author of the novel Familiar Heat and two short story collections, How Far She Went (winner of the Flannery O'Connor Award for Short Fiction and the Southern Review/LSU Short Fiction Award) and And Venus Is Blue (winner of the Lillian Smith Award, the Townsend Prize for Fiction, and the Dixie Council of Authors and Journalists Author of the Year Award). Hood's work has also been honored with the Whiting Writers' Award, the Robert Penn Warren Award, and a Pushcart Prize. A 2014 inductee into the Georgia Writers Hall of Fame, Hood lives and writes in Commerce, Georgia.

"Seam Busters captures so much of what makes life good, of what the word community really means. It, too, delivers truth about the American way: people doing thingsall kinds of things, great and smallwith love."—Southern Literary Review

"Mary Hood has mastered the high wires of brevity and conciseness. Her deeply imagined characters speak as if they are offering their own true and often fabulous commentary on the book of life itself."—Idgie, Dew on the Kudzu

"Georgia novelist Mary Hood puts her fine gifts of scene-setting and characterization to work in this compact little saga of a rural sewing factory and the women bound by hard times to its ever-running machinery. Hood highlights the plentiful humor of her cast, and, in the face of a community tragedy, a humanity and warmth beyond all expectations."—Dot Jackson, author of Refuge

"Mary Hood busts the seams of the 'factory-broken' farmers in Ready, Georgia, where the Diet Coke and the Bible are both open. When her son is brought back from 'A-Stan,' Irene Morgan is straightening inseams. Everybody, also the Hmong, mourns and is folded into America today. Hood's fiction brings back Erskine Caldwell's realism and Marion Montgomery's compassion."—Jan Nordby Gretlund, Center for American Studies, University of Southern Denmark

"I don't believe Mary Hood is capable of writing an uninteresting sentence. She can say in three words what I can say in 160. Like all the great writers, Mary Hood has mastered the high wires of brevity and conciseness. Her deeply imagined characters in her novella Seam Busters, as in all of her writing, speak as if they are offering their own true and often fabulous commentary on the book of life itself."—Pat Conroy, author of The Death of Santini