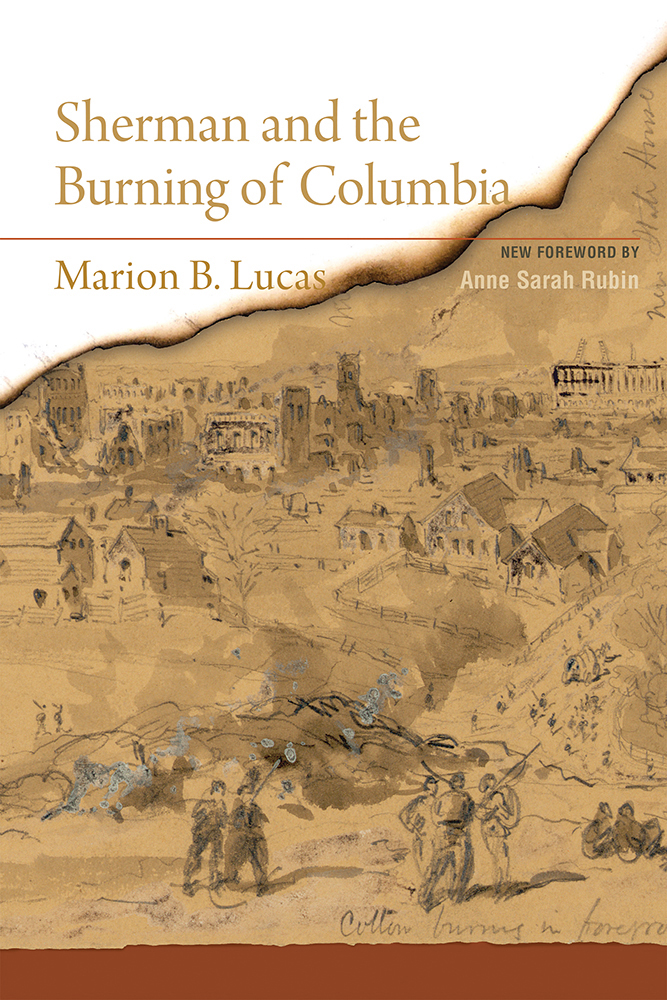 Sherman and the Burning of Columbia

An investigation into who burned South Carolina's capital in 1865

Who burned South Carolina's capital city on February 17, 1865? Even before the embers had finished smoldering, Confederates and Federals accused each other of starting the blaze, igniting a controversy that has raged for more than a century. Marion B. Lucas sifts through official reports, newspapers, and eyewitness accounts, and the evidence he amasses debunks many of the myths surrounding the tragedy.

Rather than writing a melodrama with clear heroes and villains, Lucas tells a more complex and more human story that details the fear, confusion, and disorder that accompanied the end of a brutal war. Lucas traces the damage not to a single blaze but to a series of fires—preceded by an equally unfortunate series of military and civilian blunders—that included the burning of cotton bales by fleeing Confederate soldiers.

This edition includes a new foreword by Anne Sarah Rubin, professor of history at the University of Maryland, Baltimore County, and the author of Through the Heart of Dixie: Sherman's March and America.


Marion B. Lucas is University Distinguished Professor of history at Western Kentucky University in Bowling Green.

"This splendid little volume should put to rest forever the question of who burned the capital city of South Carolina."—Civil War History

"Well worthy of examination by all interested in the nature of war and the social, political, and economic ramifications of total warfare. Professor Lucas is to be commended for a very worthy research achievement."—Journal of Southern History

"For a few South Carolinians, this little book will generate more heat than anything Mother Nature can do this summer. . . It is doubtful Lucas' book will ever shut down the debate over the burning of Columbia. History spawns passionate debate around here, as we've heard all year. But at least those who read it carefully should benefit from a little more balanced historical background."—The State

"deals with one of the most difficult, most delicate issues of the Civil War and deals with it in an honest, unbiased manner."—Midlands Weekend

"The results of his efforts are eminently satisfying. He brings order out of contradiction and confusion by carefully weighing the evidence and presenting the results of his study in a simple, straightforward, and interesting manner."—McCormick Messenger