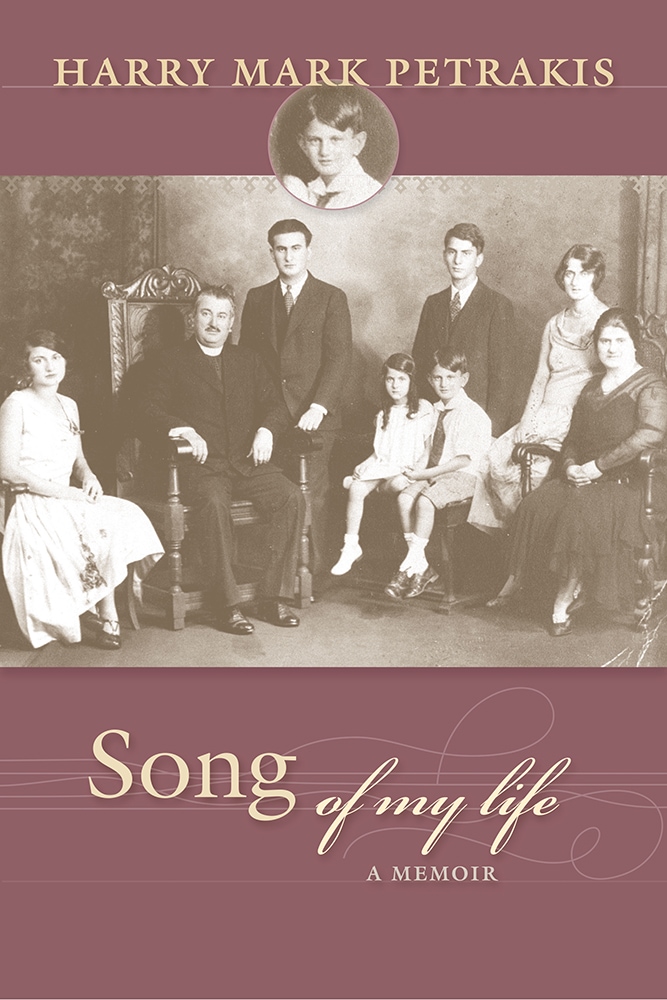 Song of My Life

With the discipline of a surgeon performing a critical operation, acclaimed storyteller Harry Mark Petrakis strips away layers of his nine decades of life to expose the blood and bone of a human being in his third memoir and twenty-fifth book, Song of My Life. Petrakis is unsparing in exposing his own flaws, from a youthful gambling addiction, to the enormous lie of his military draft, to a midlife suicidal depression. Yet he is compassionate in depicting the foibles of others around him. Petrakis writes with love about his parents and five siblings, with nostalgia as he describes the Greek neighborhoods and cramped Chicago apartments of his childhood, and with deep affection for his wife and sons as he recalls with candor, comedy, and charity a writer's long, fully-lived life.

Petrakis recounts the near-fatal childhood illness, which confined him to bed for two years and, through hours of reading during the day and night, nurtured his imagination and compulsion toward storytelling. A high school dropout, Petrakis also recalls his work journey in the steel mills, railroad depots, and shabby diners of the city. There is farce and comedy in the pages as he describes the intricate framework of lies that drove his courtship of Diana, who has been his wife of sixty-nine loving years. Petrakis shares his struggles for over a decade to write and publish and finally, poignantly describes the matchless instant when he holds his first published book in his hands. The chapters on his experiences in Hollywood where he had gone to write the screenplay of his best-selling novel A Dream of Kings are as revealing of the machinations and egos of moviemaking as any Oliver Stone documentary.

Petrakis's individual story, as fraught with drama and revelation as the adventures of Odysseus, comes to an elegiac conclusion when, at the age of ninety, he ruminates on his life and its approaching end. With a profound and searing honesty, this self-exploration of a solitary writer's life helps us understand our own existences and the tapestry of lives connecting us together in our shared human journey.


Harry Mark Petrakis published his first story, "Pericles on 31st Street," in the Atlantic Monthly in 1957. Since then he has written twenty-five books of fiction, essays, and memoirs, and he has twice been nominated for the National Book Award in fiction. Petrakis has been honored with the O. Henry Award, the Chicago Public Library's Carl Sandburg Award, and awards from the Friends of American Writers, Friends of Literature, and the Society of Midland Authors. Petrakis has adapted his stories and novels for film and television and has lectured on storytelling before colleges and clubs across the United States. He and his wife, Diana, have three sons and four grandchildren.

"Petrakis at ninety looks back on his life with honesty and humility, delving into the bazaars of memory in an attempt to understand himself"—Willard Manus (Lively-arts.com)

"A work of lyrical power and poignancy that may prove to be the most important works Petrakis has produced in a writing career that spans nearly six decades."—Spencer Michael Farmans, Chicago Sun-Times

"The extraordinarily candid Song of My Life offers insights into the nature of an American literary life of the past five decades and it is must-reading for anyone seeking an account of the life of a legendary Greek American writer. The memoir deals with many experiences not chronicled in Petrakis's previous autobiographical writings, among these firsts are his vivid accounts of working on television projects and Hollywood films. The style is vintage Petrakis: storytelling with a fine blend of passion, humor, and self-reflection."—Dan Georgakas, director of the Greek American Studies Project, Center for Byzantine and Modern Greek Studies, Queens College, City University of New York

"Petrakis at ninety looks back on his life with honesty and humility, delving into the bazaars of memory in an attempt to understand himself. . ."—Lively-arts.com

"The engaging manuscript evokes the author's powerful introspection tinged with his wistful longing for a time long past. This is an intensely personal 'confessional'—a reflection of the artistic honesty which has characterized much of Harry's writing down through the years."—Richard C. Lindberg, author of Whiskey Breakfast, My Swedish Family, My American Life

"To be lost in a babble of voices is to be mute. Chicago writers—African American, Asian, Hispanic, Irish, Jewish, Polish—have set themselves to transforming a turbulent city's port of entry babble into the mnemonic clarity of beauty in story and song. That is what Harry Mark Petrakis has done for the Greek community over a lifetime of empathetically powerful stories. That vision is the gift to readers that he continues to give us all in Song of My Life."—Stuart Dybek, author of Ecstatic Cahoots: Fifty Short Stories, Paper Lantern: Love Stories, and others