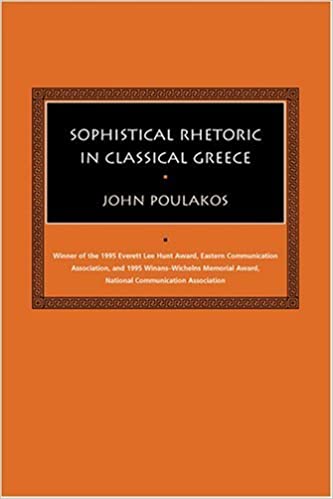 An introduction to the rhetorical tradition of sophistical dialectics in antiquity

In Sophistical Rhetoric in Classical Greece, John Poulakos offers a new conceptualization of sophistry, explaining its direction and shape as well as the reasons why Plato, Isocrates, and Aristotle found it objectionable. Poulakos argues that a proper understanding of sophistical rhetoric requires a grasp of three cultural dynamics of the fifth century B.C.: the logic of circumstances, the ethic of competition, and the aesthetic of exhibition. Traced to such phenomena as everyday practices, athletic contests, and dramatic performances, these dynamics set the stage for the role of sophistical rhetoric in Hellenic culture and explain why sophistry has traditionally been understood as inconsistent, agonistic, and ostentatious.

In his discussion of ancient responses to sophistical rhetoric, Poulakos observes that Plato, Isocrates, and Aristotle found sophistry morally reprehensible, politically useless, and theoretically incoherent. At the same time, they produced their own version of rhetoric that advocated ethical integrity, political unification, and theoretical coherence. Poulakos explains that these responses and alternative versions were motivated by a search for solutions to such historical problems as moral uncertainty, political instability, and social disorder. Poulakos concludes that sophistical rhetoric was as necessary in its day as its Platonic, Isocratean, and Aristotelian counterparts were in theirs.


John Poulakos is associate professor of rhetoric at the University of Pittsburgh and coauthor of Classical Rhetorical Theory.

"This is a careful and surprisingly readable treatment of the problematic status of the sophists in their own time and in ours. . . . Poulakos's argument adds another dimension, or at least another layer, to the [ongoing] radical re-reading of Greek rhetorical theory."—College Composition and Communication

"An exciting and accessible introduction to the tradition of sophistical dialectics in antiquity that makes the issues come alive for the modern reader."—David Konstan, Brown University