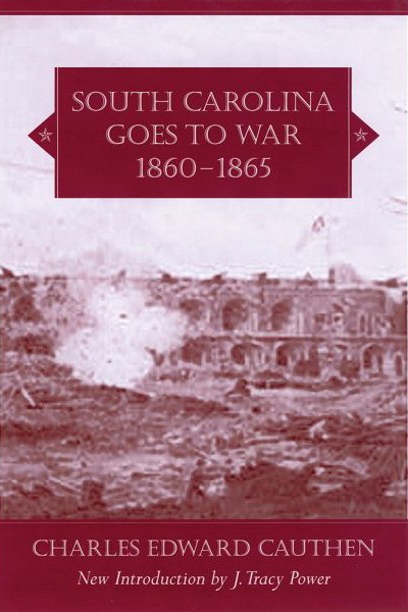 First published in 1950 and long sought by collectors and historians, South Carolina Goes to War, 1860-1865 stands as the only institutional and political history of the Palmetto State's secession from the Union, entry into the Confederacy, and management of the war effort. Charles Edward Cauthen's germinal study offers a thorough examination of the state's political leadership and policymaking during the secession crisis and the subsequent four years of war. Notable for its attention to the precursors of war too often neglected in other studies, the volume devotes half of its chapters to events predating the firing on Fort Sumter and pays significant attention to the Executive Councils of 1861 and 1862.

This edition features a new introduction by J. Tracy Power summarizing the political climate that characterized South Carolina's departure from the Union and entrance into war, and examining the significance of Cauthen's book within the context of its initial creation and reception.


Charles Edward Cauthen (1897–1964) was John M. Reeves Professor of History at Wofford College in Spartanburg, South Carolina, where he taught history and political science from 1943 to 1964. He was the editor of Family Letters of the Three Wade Hamptons, 1782–1901 and Journals of the South Carolina Executive Councils of 1861 and 1862.

J. Tracy Power is a historian at the South Carolina Department of Archives and History in Columbia. A former president of the South Carolina Historical Association, he is the author of Lee's Miserables: Life in the Army of Northern Virginia from the Wilderness to Appomattox.

"While much has been written on South Carolina in relation to the Civil War, South Carolina Goes to War is the first published volume devoted exclusively to her political history from 1860 to 1865. It is also one of the relatively few monographs covering the war period for an individual Confederate state. For these reasons it is an important addition to the history of the state and the secession."—South Carolina Historical and Genealogical Magazine

"The author clearly analyzes the propaganda in newspapers, pamphlets, political speeches, and pulpits and recognizes the mob appeal of 'Vigilance Committees,' 'Committees of Safety,' and 'Minute Men'. . . [Cauthen shows] secession was not the accomplishment of scheming politicos but the result of popular demand."—Mississippi Valley Historical Review