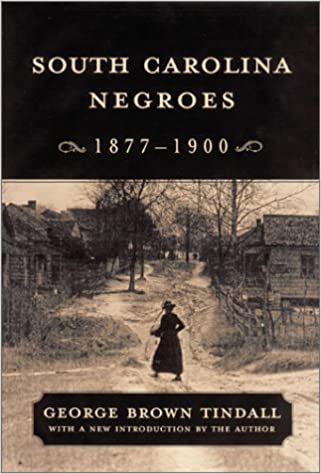 First published in 1952, South Carolina Negroes, 1877-1900 rediscovers a time and a people nearly erased from public memory. In this pathbreaking book, George B. Tindall turns to the period after Reconstruction before a tide of reaction imposed a new system of controls on the black population of the state. He examines the progress and achievements, along with the frustrations, of South Carolina's African Americans in politics, education, labor, and various aspects of social life during the short decades before segregation became the law and custom of the land. Chronicling the evolution of Jim Crow white supremacy, the book originally appeared on the eve of the Civil Rights movement when the nation's system of disfranchisement, segregation, and economic oppression was coming under increasing criticism and attack.

Along with Vernon L. Wharton's The Negro in Mississippi, 1865-1890 (1947) which also shed new light on the period after Reconstruction, Tindall's treatise served as an important source for C. Vann Woodward's influential The Strange Career of Jim Crow (1955). South Carolina Negroes now reappears fifty years later in an environment of reaction against the Civil Rights movement, a a situation that parallels in many ways the reaction against Reconstruction a century earlier. A new introduction by Tindall reviews the book's origins and its place in the literature of Southern and black history.


George B. Tindall, Kenan Professor of History Emeritus at the University of North Carolina at Chapel Hill, is also the author of The Emergence of the New South, 1913–1945 and The Ethnic Southerners, and coauthor of America: A Narrative History. He lives in Chapel Hill.