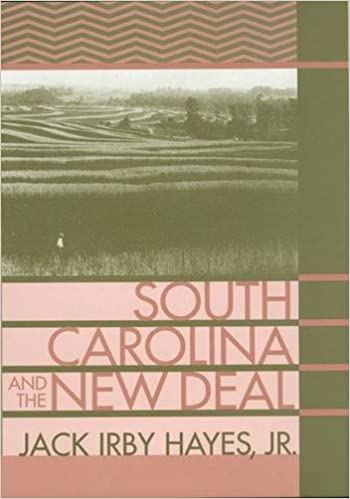 South Carolina and the New Deal

Examines how South Carolina, on its own since the Civil War, rejoined the United States in the 1930s

In this history of a Southern state's experience with the New Deal, Jack Irby Hayes, Jr., revisits the South Carolina of the 1930s to determine the impact of the federal programs on the state's economy, politics, culture, and citizenry. He traces the waxing and waning of support for programs such as Works Progress Administration (WPA), Civilian Conservation Corps (CCC), and the Federal Emergency Relief Administration (FERA) and concludes that the modernization of South Carolina would have been delayed without their intervention. Suggesting that the New Deal hastened the end of one-party political domination, Hayes proposes that it also initiated a new era of modernized agriculture and banking practices, rural electrical service, labor restrictions, relief programs, and cultural resurgence.

Describing Franklin Delano Roosevelt's initiatives in their early years as conservative in nature, almost evangelical in fervor, and largely local in administration, Hayes finds that they enjoyed widespread support among South Carolinians. He documents the welcoming of agricultural and erosion controls, welfare relief, child labor laws, minimum wage requirements, public construction, state parks, and massive hydroelectric projects. He also credits the New Deal with sparking an intellectual reawakening and a restoration of faith in capitalism, democracy, and progress. But Hayes demonstrates that by 1936 South Carolinians had begun to withdraw their approval as the New Deal veered leftward, threatened established racial practices, and upset the South's commanding influence in the Democratic Party.

While detailing the accomplishments of the New Deal, Hayes identifies its limitations, including its uneven impact on African Americans. He concludes that the inability or unwillingness of New Deal architects to redistribute wealth, control unemployment, and significantly increase consumer purchasing power prevented the return of agricultural and industrial prosperity, which World War II ultimately would restore to the state.


Jack Irby Hayes, Jr. is a professor of history and chair of the Department of History and Political Science at Averett College in Danville, Virginia. The author of Dan Daniel and the Persistence of Conservatism in Virginia and A History of Averett College, he holds a Ph.D. from the University of South Carolina in Columbia.

"Haye's study is a valuable addition to the growing body of literature studying the influence of the New Deal at the state level."—History: Reviews of New Books