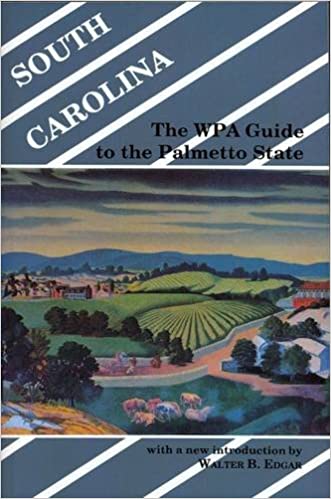 The WPA Guide to the Palmetto State

introduction by Walter B. Edgar

All of us, at one time or another, have had a strong desire to be able to get into a time machine and be transported magically to an earlier place and time. Science has not yet produced for us such a time machine, but the Federal Writers Project (FWP), a division of the Works Progress Administration, did produce for prosperity guides to all of the old 48 states. Using talented local researchers and writers the FWP created an image of America fifty plus years ago.

A reprint of the original, South Carolina: The WPA Guide to the Palmetto State is divided into three sections: 19 essays on a variety of topics ranging from history to cookery; detailed descriptions of the 11 towns in the state that had populations of more than 10,000; and 21 remarkably detailed guided tours to all sections of the state. In addition to the original chapters, there are two appendices—updated highway numbers for each tour and a guide to getting off the present Interstate Highway System and picking up the guided tours.

South Carolina's Guide is very much a product of its times. The essays and tours mince no words in describing the state's poverty or the reality of a world in which class and race played major roles. For those who have studied and taught South Carolina history, the old Guide has been an indispensable reference work. Parts of it may be dated to some jaded modern eyes; some phrases may be jarring to the post-1954 generation. However, the original South Carolina: The WPA Guide to the Palmetto State was what its cover claimed it to be. It accurately described the state as it was—not as romantics wanted it to be.