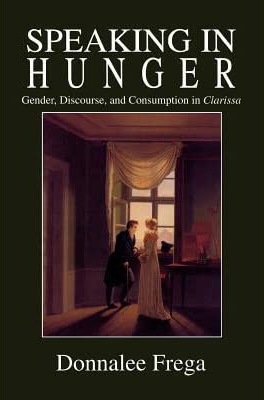 Gender, Discourse, and Consumption in Clarissa

Draws on history, clinical studies, and literature to portray anorexia not as a private illness but as a learned and shared family language

Female hunger and eating habits have long been regarded as a form of discourse, a rich and complex metaphoric language of victimization, physicality, eroticism, and empowerment. Feminist scholars acknowledge that women's ability to manipulate food distribution and their bodies (often the only resources in their power) can be a double-edged sword, a tool that allows women to repress their sexuality, to establish social rank, to engage in charitable activities, even while it forces them to accommodate physical victimization in order to empower themselves. I wish to argue that this seeming contradiction, often recognized as a mere displacement of power—a metaphoric equation of hunger with femininity, virginity, spiritualism, or class position—oversimplifies hunger as a language because it ignores the intricate ways in which this language is learned and shared.—from the Introduction

Donnalee Frega confronts the growing tendency in both popular and scholarly studies to view eating disorders as a secret and private form of negative self-expression "suffered" primarily by women. Drawing on history, clinical studies, and literature, Frega's comprehensive study approaches anorexia not as an illness, but as a dangerous strategy employed by healthy young people of both sexes against unrealistic expectations of perfection.

Frega examines in depth the three areas in which eating disorders are most likely to flourish: the home and family; society, particularly through friendships and romantic relationships; and the religious or spiritual realm. She illustrates her discussion with a lively reading of Samuel Richardson's compelling novel Clarissa, the psychologically realistic story of a "fasting" girl that evoked international outrage when it was published in 1748 and continues to impress scholars and therapists today.

The author considers the broad range of social and cultural factors that have defined "abnormal" eating practices throughout history, and she convincingly argues that when anorexia is viewed as an effective language that is learned and shared through family interaction (rather than as a hopeless attempt to repudiate life), much of its mystery is dispelled.


Donnalee Frega is a visiting scholar in the Department of English at Duke University. She resides in Castle Hayne, North Carolina, with her husband, Alvin, and their three children.

"This is a book that invites its readers to enter into a dialogue with it—an invitation all the more tempting because the book itself is written in deliciously lucid, elegant prose. Frega's book deserves to be read by scholars of Richardson, of the eighteenth-century novel, of women's studies, and of cultural studies, as well as by many others."—South Atlantic Review

"At long last, a full-length study of Clarissa Harlowe's self-imposed, and somewhat unchristian, bread-and-water regime. Frega's best interpretations, like those of a good psychoanalyst, turn on Richardson's wonderful and endless minutiae, and in this she is surely faithful to the demands of the text."—Eighteenth-Century Fiction