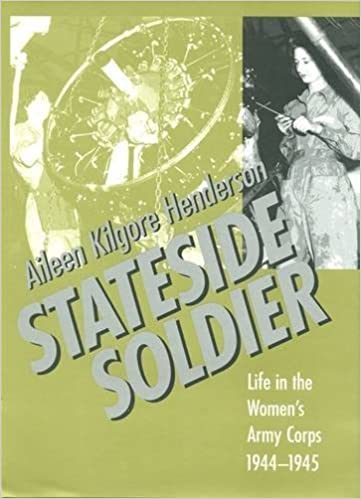 "I don't know anybody who has ever done such a daring thing as I have done," twenty-two-year-old Aileen Kilgore of Brookwood, Alabama, wrote in her diary in January 1944, after enlisting in the Women's Army Corps (WAC) during World War II. From basic training in Fort Oglethorpe, Georgia, to her discharge in late 1945, Kilgore served as one of more than 150,000 American women who joined the Women's Army Corps—the first group of women other than nurses to serve in the ranks of the United States Army. Now, more than fifty years later, Aileen Kilgore Henderson has collected and edited diary entries and personal letters that recount in an engaging narrative style her twenty-three months of experiences in the Army. A skilled writer of fiction and nonfiction, Henderson addresses a little explored facet of World War II—the military service of women stationed stateside.

Recording the excitement and anxiety of enlisting, along with the camaraderie, challenges, and monotony of military life and labor, Henderson had a keen eye for the newness of her undertakings. She worked as one of only six female airplane mechanics at Ellington Air Force Base and as a photo lab technician, and she provides animated descriptions of her duties and diversions on the base. A detailed document of daily life in the service, her writings also chronicle the cultural shock of a young woman from the hills of Alabama introduced to Army discipline; sharing close quarters with women of different religious, ethnic, and geographic backgrounds; and interacting with female officers, male soldiers, and civilians. Additionally, Henderson reveals the public scrutiny and criticism WAC members faced as they assumed nontraditional roles. A fascinating record of history in the making, Henderson's diary and letters offer a window into the lives of groundbreaking women and their lasting impact on the United States Armed Forces.


After her discharge from the Women's Army Corps, Aileen Kilgore Henderson returned home to Alabama and earned a B.A. and M.A. from the University of Alabama in Tuscaloosa. She has taught school in Alabama, Texas, and Minnesota and has worked as museum docent, freelance writer, and photographer. Henderson has published three award-winning books for children, and she continues to lead many writing workshops for young people and adults. She lives in Brookwood, Alabama.

"Recommended for all general readers and especially for those intrigued by the challenges of women's history."—Choice