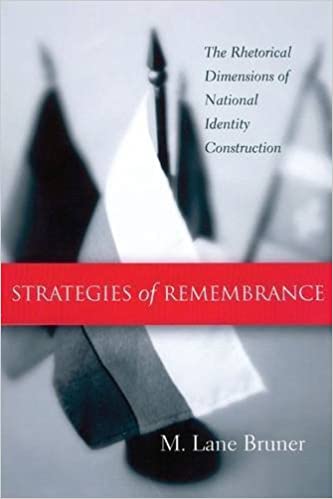 At a time when national identity is a potent political force, Strategies of Remembrance sheds light on the relationships between economic, civic, cultural, and ethnic forms of nationalism, and on the interactions of nationalism in those forms with the politics of memory and the rhetoric of democracy.

Despite the broadly acknowledged fact that national identities are negotiated through discourse, concrete studies of the process are rare. By focusing on rejected public addresses, critically investigating reactions to those speeches, and examining what he calls "narrative omissions"—what politicians are constrained from saying in an official capacity—M. Lane Bruner elucidates the complex relationships between public speech and community building.

Strategies of Remembrance visits Europe in the waning years of the Cold War, as manipulations of national identity functioned both to erase the painful memories of National Socialism and to promote West Germany's role as the vanguard of democratic capitalism—while Germans were characterized as the victims of the Second World War. Bruner looks at Russia prior to the adoption of a new constitution in 1993, when appeals to national identity functioned primarily to corruptly facilitate the transition from a centralized to a market economy while the Soviets and democracy were characterized as incompatible. Last, he turns to Quebec's attempt in 1995 to secede from Canada and explains how, after a narrow defeat, secessionist supporters shifted from ethnic and cultural to civic nationalism in a Quebec where historically secession had been justified to protect French Canadian culture.

Together, Bruner's studies suggest the important role the fashioning of national identities will continue to play in the twenty-first century and the need for ongoing critiques of the rhetorical means employed.


M. Lane Bruner is an assistant professor of public communication at Georgia State University. His scholarship has appeared in journals including the Quarterly Journal of Speech, National Identities, Discourse and Society, and Communication Studies. Currently researching the rhetoric of free trade, Bruner lives in Atlanta.

"M. Lane Bruner's Strategies of Remembrance is an important book that deserves a wide audience. Focusing on the rhetorical construction of national identity and character in three distinct contexts—Russia, West Germany, and the province of Quebec—Bruner conducts a comparative analysis that is sure to become a model of cross-cultural rhetorical criticism. This is a unique contribution that will appeal to scholars in political science, international affairs, and history, as well as communication studies."—Martin J. Medhurst, Texas A&M University