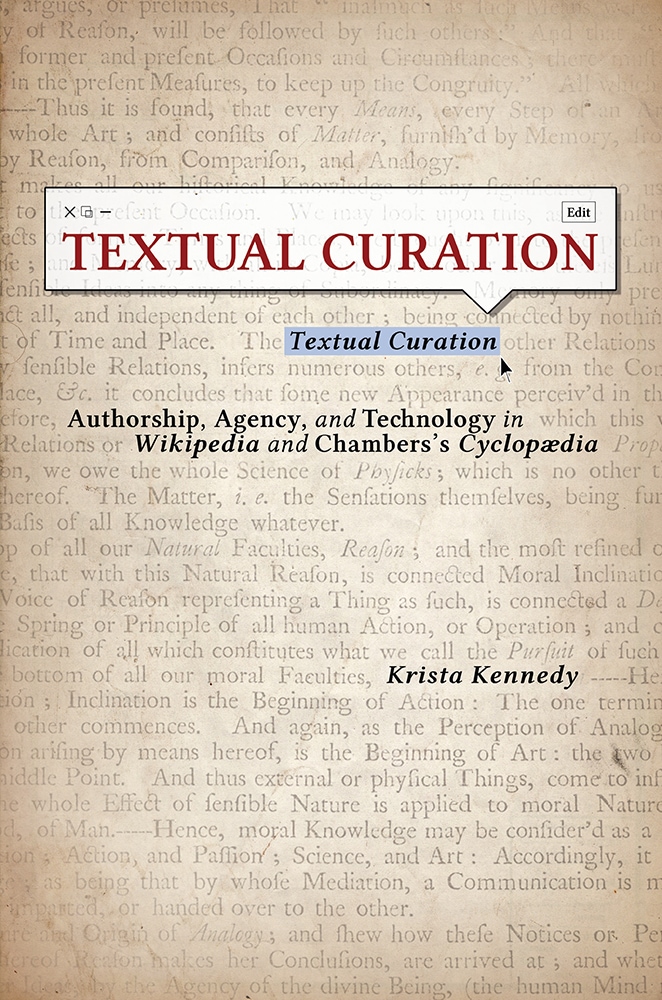 Authorship, Agency, and Technology in Wikipedia and Chambers's Cyclopaedia

Wikipedia is arguably the most famous collaboratively written text of our time, but few know that nearly three hundred years ago Ephraim Chambers proposed an encyclopedia written by a wide range of contributors—from illiterate craftspeople to titled gentry. Chambers wrote that incorporating information submitted by the public would considerably strengthen the second edition of his well-received Cyclopædia, which relied on previously published information. In Textual Curation, Krista Kennedy examines the editing and production histories of the Cyclopædia and Wikipedia, the ramifications of robot-written texts, and the issues of intellectual property theory and credit. Kennedy also documents the evolution of both encyclopedias as well as the participation of central players in discussions about the influence of technology and collaboration in early modern and contemporary culture.

Through this comparative study, based on extensive archival research and data-driven analysis, Kennedy illuminates the deeply situated nature of authorship, which is dependent on cultural approval and stable funding sources as much as it is on original genius and the ownership of intellectual property. Kennedy's work significantly revises long-held notions of authorial agency and autonomy, establishing the continuity of new writing projects such as wikis with longstanding authorial practices that she calls textual curation.

This study examines a wide range of texts that recompose accepted knowledge into reliable, complex reference works combining contributions of article text alongside less commonly considered elements such as metadata vocabularies, cross-indexing, and the development of print and digital interfaces. Comparison of analog and networked texts also lays bare the impact of technological developments, both in the composing process and in the topics that can practically be included in such a text. By examining the human and technological curators that support these encyclopedias as well as the discourses that surround them, Kennedy develops textual curation as a longstanding theory and process that offers a nuanced construction of authorship.


Krista Kennedy is an assistant professor of writing and rhetoric at Syracuse University, where she teaches courses in the rhetoric of technology, authorship, and technical and professional writing. Her work has appeared in College English, Computers and Composition, and various edited collections.

"Textual Curation offers digital rhetoric and composition studies an exciting new study of distributed authorship. Kennedy's theory of textual curation illuminates the relationships between human and technological rhetorical agents, past and present. In a culture of bot writers and algorithmic authors, her book is a must read for anyone interested in authorship and machine agency."—Jessica Reyman, Northern Illinois University

"With Textual Curation, Krista Kennedy delivers the scholarly equivalent of a slam dunk: one just stands back and says BRAVA. This meticulously researched and ingeniously argued analysis of distributed authorship in Chambers's 1728 Cyclopædia and the current Wikipedia demonstrates that today's 'people's encyclopedia' has been at least 300 years in the making. Simply a must read!"—Andrea A. Lunsford, Stanford University