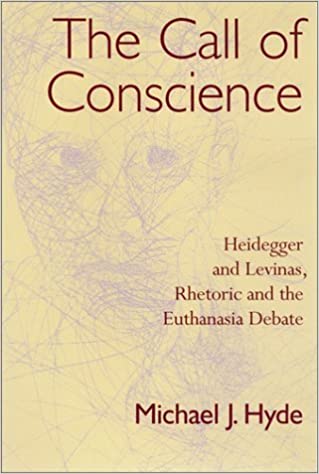 The Call of Conscience

Heidegger and Levinas, Rhetoric and the Euthanasia Debate

Michael J. Hyde's pathbreaking study considers the relationship between the phenomenon of conscience and the practice of rhetoric as it relates to the controversial issues of euthanasia. Hyde investigates how the practice of rhetoric becomes a voice of conscience and influences the moral standards of individuals and communities. In doing so, he offers the first extensive treatment of Martin Heidegger's and Emmanuel Levinas's philosophical investigations of conscience and an in-depth analysis of the justifiability and social acceptability of euthanasia.

Hyde establishes the theoretical basis of his study by discussing and critically assessing the phenomenological theories of conscience set forth in the works of the two philosophers. To illustrate how the relationship between the call of conscience and the practice of rhetoric shows itself in everyday existence, Hyde surveys the moral discourse that informs ongoing debates over euthanasia and physician-assisted suicide. He focuses on a cluster of related topics that emerge from his discussion of the work of Heidegger and Levinas, including the phenomena of deconstruction and acknowledgment, emotion and the reconstructive power of language, and the discursive creation of heroes.


Michael J. Hyde is the Distinguished University Professor of Communication Ethics at Wake Forest University in Winston-Salem, North Carolina, and holds a joint appointment in the Program for Bioethics, Health, and Society at Wake Forest's School of Medicine.

"Hyde's work is an engaging and important example of how one might understand the role of rhetoric in a pluralistic culture. What we have here is a glimpse of a real-life postmodern rhetorical ethics, one that insists on taking responsibility for maintaining a plurality of voices in every discussion. This is a vigilant rhetoric dedicated to seeing that the 'faces' of the suffering and dying are not obscured by our tendency to sanitize them with a discourse that would protect us from their pain and help us avoid responsibility for their untidy existence."—Rhetoric Review

"This makes for a refreshing new approach to the euthanasia debate and one worth reading."—Choice