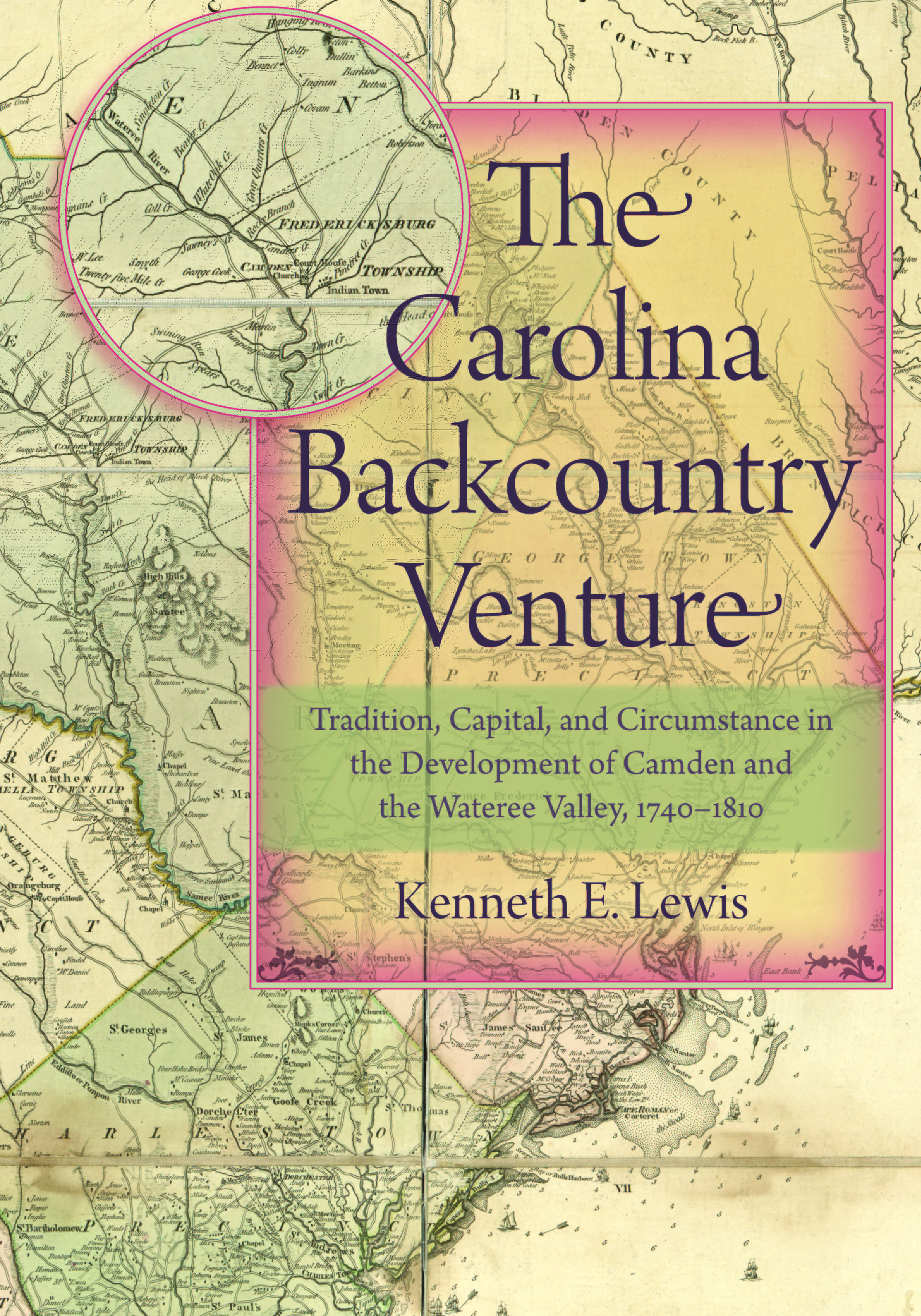 Tradition, Capital, and Circumstance in the Development of Camden and the Wateree Valley, 1740-1810

The Carolina Backcountry Venture is a historical, geographical, and archaeological investigation of the development of Camden, South Carolina, and the Wateree River Valley during the second half of the eighteenth century. The result of extensive field and archival work by author Kenneth E. Lewis, this publication examines the economic and social processes responsible for change and documents the importance of those individuals who played significant roles in determining the success of colonization and the form it took.

Established to serve the frontier settlements, the store at Pine Tree Hill soon became an important crossroads in the economy of South Carolina's central backcountry and a focus of trade that linked colonists with one another and the region's native inhabitants. Renamed Camden in 1768, the town grew as the backcountry became enmeshed in the larger commercial economy. As pioneer merchants took advantage of improvements in agriculture and transportation and responded to larger global events such as the American Revolution, Camden evolved with the introduction of short staple cotton, which came to dominate its economy as slavery did its society. Camden's development as a small inland city made it an icon for progress and entrepreneurship.

Camden was the focus of expansion in the Wateree Valley, and its early residents were instrumental in creating the backcountry economy. In the absence of effective, larger economic and political institutions, Joseph Kershaw and his associates created a regional economy by forging networks that linked the immigrant population and incorporated the native Catawba people. Their efforts formed the structure of a colonial society and economy in the interior and facilitated the backcountry's incorporation into the commercial Atlantic world. This transition laid the groundwork for the antebellum plantation economy.

Lewis references an array of primary and secondary sources as well as archaeological evidence from four decades of research in Camden and surrounding locations. The Carolina Backcountry Venture examines the broad processes involved in settling the area and explores the relationship between the region's historical development and the landscape it created.


Kenneth E. Lewis, a professor emeritus of anthropology at Michigan State University, is a historical archaeologist with a long-standing interest in the processes of colonization and has conducted research in South Carolina since the 1970s. Lewis holds an M.A. degree from the University of Florida and a Ph.D. from the University of Oklahoma. He is the author of The American Frontier: An Archaeological Study of Settlement Pattern and Process; West to Far Michigan: Settling the Lower Peninsula, 1815–1860; and Camden: Historical Archaeology in the South Carolina Backcountry, as well as numerous monographs, articles, and chapters.

"Ken Lewis' exhaustive work draws from many disciplines to present a detailed study of a small place in central South Carolina, set on a larger canvas of settlement and expansion on the southern frontier. It ties the story of Camden to contemporary events in Charleston and beyond. The Backcountry Venture will become an essential work for understanding South Carolina's colonial backcountry before and after the American Revolution"—Martha Zierden, curator of historical archaeology, Charleston Museum

"The Backcountry Venture is a methodological masterpiece which explores the processes associated with transforming a frontier into part of the larger economic and political entity. Based on his decades-long study of eighteenth century South Carolina Lewis takes the reader beyond the Ashley and Cooper Rivers to Camden and the surrounding Upcountry region."—Russell K. Skowronek, University of Texas Rio Grande Valley

"Lewis is skillful at identifying the buildings, fortifications, land acquisition, and other physical aspects of growth in the backcountry... The book incorporates the current interest in the history of capitalism into understanding the commercial arrangements of the region."—Choice