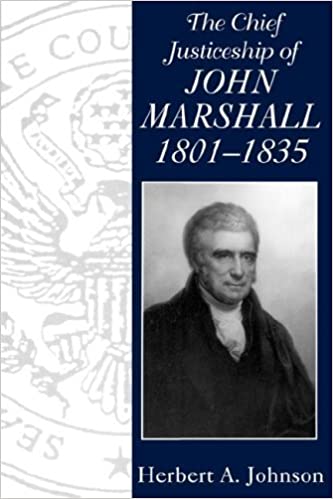 Perhaps no one has exerted a more profound influence on the United States Supreme Court or on the Federal Constitution than Chief Justice John Marshall. In this history of the high court during the critical years from 1801 to 1835, Herbert A. Johnson offers a comprehensive portrait of the court's activities and accomplishments under Marshall's leadership. Johnson demonstrates that in addition to staving off political attacks from the Jeffersonian and Jacksonian political parties, the Marshall Court established the supremacy of the federal government in areas of national concern, enunciated the commerce and contract clauses as critical foundations for economic development, and definitively shaped the structure of federalism before the Civil War.

Herbert A. Johnson is the Ernest F. Hollings Professor of Constitutional Law at the University of South Carolina School of Law in Columbia. A past president of the American Society for Legal History, Johnson is a former editor of The Papers of John Marshall.

"It is rare indeed that the academic reappraisal of a frequently examined judicial leader, a towering one in American jurisprudence, produces results which may fundamentally change the way scholars evaluate such judicial leadership. Herbert Johnson's work on John Marshall's Chief Justiceship is one of those rare positive exceptions."—John R. Schmidhauser, University of Southern California

"General readers will be delighted to find such a balanced and comprehensive discussion of the history and historiography of the Marshall Court in this accessible form. Specialists will be struck by the painstaking scholarly research, erudition, fine writing, keen insight, and judicious inference."—American Historical Review

"One of the best works to date on the Marshall Court."—Choice