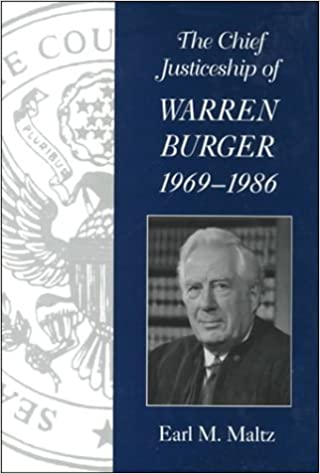 A provocative interpretation of the Burger Court

In The Chief Justiceship of Warren Burger, 1969-1986, Earl M. Maltz offers a comprehensive summary and analysis of the Supreme Court's impact on American law and government during Burger's tenure. Undoubtedly one of the most interesting periods in Supreme Court history, the Burger Court generally holds a place in America's judicial memory as a centrist or mildly conservative institution that followed the liberal constitutionalism of the Warren Court and preceded the conservative ideology of the Rehnquist Court. Maltz demonstrates, however, that under Burger the Court's ideological transition was far from immediate and certainly not regular or universal in process. Maltz contends that in many areas of constitutional law the Burger Court produced the most liberal jurisprudence in history—even more liberal than that of its predecessor.

Acknowledging that the decision-making complexities of Burger's era have spawned widely varied interpretations of the Court, Maltz insists that discernible patterns explain the doctrinal positions adopted by the majority of justices in any given case. He advances the controversial thesis that Burger Court activism occurred almost entirely in a liberal direction, even after the appointment of Justices Harry A. Blackmun, Lewis F. Powell, Jr., and William H. Rehnquist. Maltz demonstrates that in cases involving issues such as religion and nonracial discrimination, the Court moved in a liberal direction.

Looking beyond the delineation of doctrinal positions, Maltz considers the personalities and complex political attitudes of the justices, the inability of conservative justices to institutionalize their ideology because of their rejection of judicial activism, and Burger's leadership of the Supreme Court.


Earl M. Maltz is Distinguished Professor of Law at Rutgers University School of Law in Camden, New Jersey. He is the author of Rethinking Constitutional Law: Originalism, Interventionism and the Politics of Judicial Review and Civil Rights, the Constitution, and Congress 1863–1869.