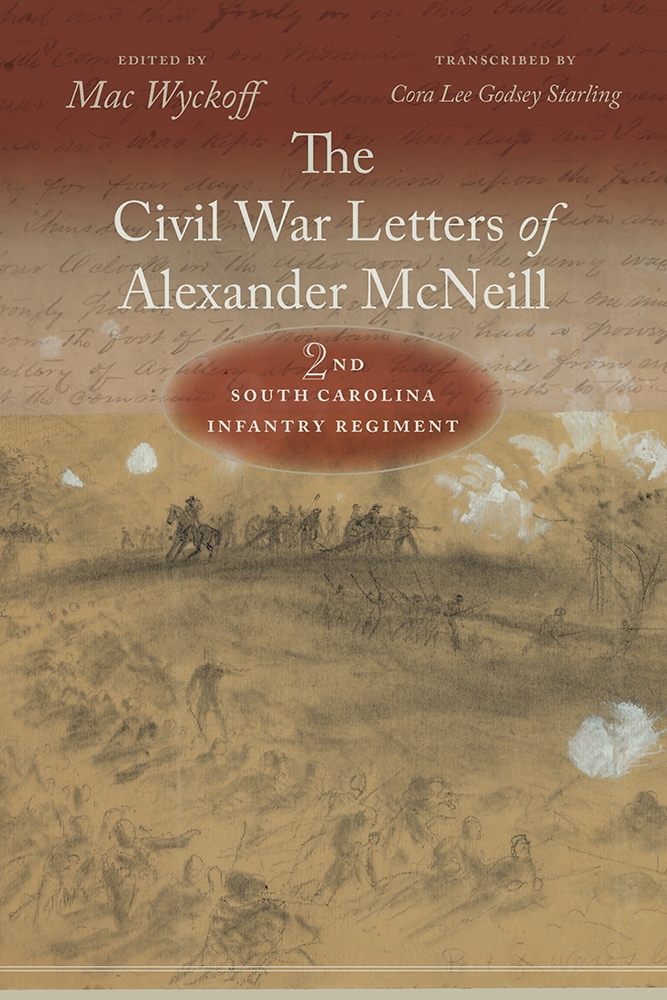 During the American Civil War, Alexander "Sandy" McNeill, a southern merchant, served in the Secession Guards, Company F, and Second South Carolina Regiment from April 17, 1861, to May 2, 1865. Within three weeks after the war began at Fort Sumter, McNeill wrote his first epistle to his long-time friend, Almirah Haseltine "Tinie" Simmons, in a campaign to win her heart and hand in marriage. The 29-year-old McNeill proclaimed in that letter, "I have always esteemed you as a friend and now I feel stealing over me a feeling which tells me that you are now held in higher estimation than that of a friend."

Civil War historian and documentary editor Mac Wyckoff adds context to the correspondence, more than two hundred letters that encompass the entire duration of the war. With the exception of three breaks in communication, McNeill wrote to Tinie four to five times a week and persisted to the last week of April 1865, more than two weeks after General Robert E. Lee had surrendered at Appomattox Court House, Virginia. In general, letters written during the final six months of the war are hard to find as are many other primary source materials for the waning war.

While this is among the largest and fullest Civil War collections, it is the literary quality of McNeill's letters and wide variety of topics reported that distinguish it from others. In frequent and lengthy missives, McNeill opened his heart and mind to Tinie, his fiancée and then wife. He fulsomely reported his experiences and thoughts on a soldier's life during this war, describing combat, camp life, the building of winter quarters, the marches, company election of officers, weather, food, and morale. McNeill chronicled his experiences at First Manassas (Bull Run), Fredericksburg, Chancellorsville, Gettysburg, Chickamauga, and other battles. A man of sophisticated opinions, McNeill voiced his personal views on political, religious and military events, and the names of fellow soldiers he liked and disliked—all illuminating his deep, dynamic character.


Mac Wyckoff is a retired National Park Service historian who served at the Shiloh, Chickamauga, and Fredericksburg National Military Parks for forty years. He is the author of A History of the 2nd South Carolina Infantry, 1861–1865 and A History of the 3rd South Carolina Infantry, 1861–1865 and coauthor of The Legacy of a Common Civil War Soldier: Private Thomas Marion Shields, a Collection of 34 Letters, 1861–1865.

"Mac Wycoff was a fortunate choice to edit the McNeill letters. The author of two published histories of the 2nd South Carolina, Wycoff brought to the task an intimate knowledge of Kershaw's command. I am short on criticism and long on praise for this remarkable collection of letters."—Civil War News

"Alexander McNeill of Kershaw's South Carolina brigade fought through most of the war with the Army of Northern Virginia, often in desperate moments and in dramatic scenes. His letters afford a rich perspective on four years of war, including a description of wading into the 'the terrible missiles of death' at Gettysburg."—Robert K. Krick, author of Stonewall Jackson at Cedar Mountain

"Historian Mac Wyckoff has used his expert knowledge of Kershaw's Brigade to provide accurate settings and appropriate commentary for Sandy McNeill's exquisitely written and very personal letters to his wife. These nearly weekly accounts of a soldier's thoughts of the war and his concerns of home provide a good understanding of what it was like to fight in this complex and cruel war."—DeWitt Boyd Stone, Jr., author of Wandering to Glory: Confederate Veterans Remember Evans' Brigade

"Modern readers will also find these heartfelt, frank, and eloquent letters interesting McNeill's candor and openness along with his powers of description make his letters an absorbing narrative.well researched and effectively annotated."—South Carolina Historical Magazine